As the presidential campaign kicks into high gear a year and a half before the actual election, we here in America can look forward to opening our mail boxes every week or so and finding solicitations from the various candidates asking us to contribute to them. Several days ago I received one from Republican candidate and former Massachusetts governor Mitt Romney.

Just as one would expect from any Republican presidential candidate, Romney's appeal letter is sprinkled throughout with obligatory praises to Ronald Reagan. Romney touts his success in founding Bain Capital, his "rescuing" of the 2002 Salt Lake City Olympics, and his tenure as governor of Massachusetts, where he boasts that after taking office at a time when "the state was in a dire financial crisis," he took "dramatic steps" and "presided over a dramatic reversal of state fortunes and a period of sustained economic expansion." If Romney's term as governor had been any more "dramatic" it would have been made into a Martin Scorsese film.

I had known about Mitt Romney since he ran for the Senate against Ted Kennedy back in the early 1990's. He had a reputation as a liberal Republican, and if memory serves, not a few conservatives labelled Romney as a RINO, or Republican In Name Only. But now that Romney is seeking nationwide office, he has to appeal to a more conservative electorate than that of the relatively liberal New England state of Massachusetts. And that of course means courting the Evangelical base of the Republican Party, which entails disavowing past support for abortion rights, gay rights, and embryonic stem cell research. And, if that were not bad enough, it apparently also means that Mitt Romney feels compelled to suck up to this guy: 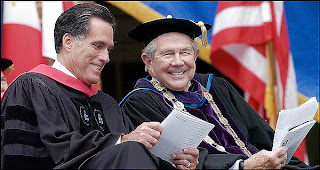 As much as I don't like it, I understand that evangelical Christians are a large and influential voting block in this country and that any serious candidate for the presidency, or at least the Republican nomination for the presidency, has to appeal to them. But it sickens me when Republican candidates feel obliged to appear chummy in public with the likes of Pat Robertson or the recently departed Jerry Falwell, because when they do they legitimize these mean-spirited and bigoted preachers as legitimate standard bearers for moral values.
And, as this Washington Post article points out, there is at least a segment of Evangelical voters that are not too thrilled with Romney's Mormon background. As Christopher Hitchens has quipped several times on his recent television appearances, "don't you always love to see how the Christians really love one another?"
Personally, I care not a whit about Romney's Mormon faith. As an atheist, it is bizarre to me how any sane thinking person can take the claims of Mormonism seriously. But then again, it is probably only zanier than Catholicism and the various other Christian denominations by a matter of degrees. I actually think that being a Mormon could be a plus in Romney's favor, because as a member of a religion that is still not quite considered mainstream within the United States, I should like to think that Romney would have a greater appreciation for tolerance and pluralism. Maybe I am wrong, but the Religious Right would not carry the same clout in a Mitt Romney administration as it has with the current administration of George W. Bush.

My take on Mitt Romney at the present time is that he is a man of some accomplishment, and unlike the current occupant of the White House, Romney actually succeeded in the business world. But as a politician, Romney is not solidly grounded, and he seems to sway either liberal or conservative depending on the direction of the prevailing winds. He also lacks a dynamic personality or rhetorical flair that could inspire a large turnout for him. That being said, I believe that his background makes him qualified to be President of the United States and I could probably live with it if he ended up being elected. He certainly has the potential to be a serious contender for the Republican nomination, though it remains to be seen if his candidacy will develop any traction.
UPDATE:
Well, Romney's remarks on the death of Jerry Falwell certainly lessen any appeal that Romney might have had for me:
"An American who built and led a movement based on strong principles and strong faith has left us. He will be greatly missed, but the legacy of his important work will continue through his many ministries where he put his faith into action.
"Ann and I have had the honor to talk and meet with Reverend Falwell and get to know him as a man of deep personal faith and commitment to helping those around him. He will be forever remembered."
Here's a column by Max Blumenthal at The Nation about Falwell, and any candidate who praises his legacy should be specifically asked to respond to Falwell's anti-segregationist background.
Posted by Tommykey at 10:27 PM

"I actually think that being a Mormon could be a plus in Romney's favor, because as a member of a religion that is still not quite considered mainstream within the United States, I should like to think that Romney would have a greater appreciation for tolerance and pluralism."

Think again. Here are some quotations from various Mormon leaders and from their scriptures:

Until 1978 blacks were not allowed to hold the priesthood (something that is prescribed for all adult male Mormons). Mitt Romney was a Mormon in 1978. Someone should ask him if those quoted Mormon scriptures are really the word of God and if those so-called "prophets" of the Mormon church were speaking for God.

I find it very disheartening when people in public office spend any time with people like Pat Robertson or the now deceased Jerry Falwell. They give a voice to intolerance and hate. Although, it probably doesn't matter anyway. I am a democrat through and through and won't have any say in which Republican is nominated for the presidency.

I certainly want a president that has leadership, financial, moral values and family values that Mitt Romney has. He would be a great president and certainly is aware of what some people think aabout his being a morman. Read Hugh Hewitt's book "Can a Morman be President". A good read!!!

Thank you all for visiting and your comments.

Jim, it is of course perfectly fair to ask Mitt Romney about discrimination against blacks in the Mormon church.

Since I do not live in Massachusetts, I do not know that much about Romney's record as governor. You would have to look at his public statements, the bills he signed, and the policies he advocated, to see if anything he supported could be construed as racist.

Thank you for your comments Barbara. As I wrote in the post, I do not care about Romney being a Mormon. Unlike Bush, who stocked his cabinets with Evangelical Christians, I don't see a Romney administration filling its positions with Mormons. Again, one would have to look at Romney's tenure as governor of Massachusetts to see if he used his office to provide government positions for Mormons. I would suspect the answer is no.

Trissa, I totally agree about Falwell and Robertson. Personally, I am an independent voter. I am generally libertarian, favoring free markets and fiscal conservatism, while embracing more liberal social policies. I have to say though that I have leaned more towards the Democrats in the last couple of years.