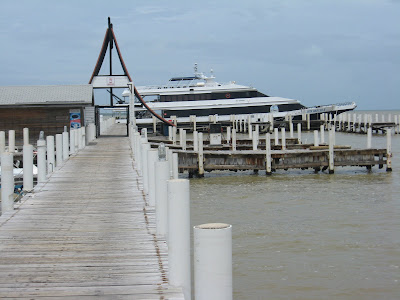 Yes, I'm long overdue with posting about my scuba diving trip to Belize last August. And since I can't really think of anything else to write about lately, I might as well write about my big adventure.
The day got off to a real early start, as I drove to Seascapes in Syosset around 5:30 a.m. where those of us going on the trip were meeting for the bus ride that was chartered to take us to Newark Airport in New Jersey for the flight to Belize City. Apart from Larry, the owner of Seascapes, I did not know any of the other people going on the trip, which was fine, as it turned out quite of few of them did not know each other either.
On the drive to Newark, I chatted with some of my fellow travelers. We were a diverse group in terms of age range, from a couple of guys in their early twenties, Josh and Sam, to an octogenarian named Leo. Sam was a funny guy and turned out to be my roommate on the Sundancer II, the boat featured in the picture above.
The flight to Belize, which I believe arrived around noon local time, was a lot faster than I expected, about two and a half hours. The airport at Belize was not very big, around the size of Islip Airport on Long Island for those who are familiar with it. A couple of representatives from Peter Hughes picked us up at the airport and brought us to the Radisson Fort George in Belize City, which is right by the docks where the Sundancer II was moored. We couldn't board the boat until 3 p.m., because the crew was still tidying the ship up. This is normal, as the previous passengers disembarked earlier that morning. The wait at the Radisson though was the worst part of the trip, as that is where we truly began to feel the heat as we sat by the outdoor bar near the pool. Strangely, the music played over the speakers, rather than being Caribbean music, was from a station playing Eighties hard rock.
Finally, at 3 p.m., one of the crew members came over and told us we could begin boarding. In the passenger galley, a list was posted telling us which rooms we were in. Sam and I got the room on the port side that was closest to the dive deck. Not having been on a liveaboard boat before, I was pleasantly surprised at how spacious everything was. 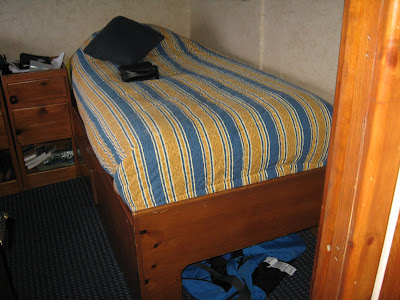 Above is the bed I slept on with ample storage space below. We also had overhead cabinets that do not appear in this picture. And of course, we had a nice view from our cabin window. 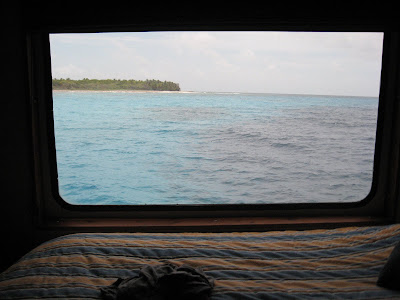 In the early evening, we assembled in the dining and lounge room, where we were officially introduced to the captain and crew of the Sundancer II. The captain of the ship was a tall, strapping Englishman named James Cooke, who acknowledged in his opening remarks that unlike the famous 18th century English navigator, his last name ended with an "e". Captain Cooke and his First Mate, Marnie, described the daily routine that would prevail on the ship for the next five days. Each morning, after breakfast, we would have a briefing of the morning's diving site. For the first three days on the water, there would be five scheduled dives. The first at 8:30, the second at 10:30, the third at 2:00 p.m, the fourth at 4 p.m., and a night dive at 8 p.m., though I could be off a bit on the exact times, as some four months have elapsed. The morning dives would be at one dive site, and the afternoon and night dives would be at a second dive site. On the fourth day, we would dive the famous Blue Hole in the morning, make an excursion in the late morning to visit a bird sanctuary at Half Moon Caye, and then do two afternoon dives and a night dive. The last full day of diving, Thursday, would feature four dives, including a dusk dive, followed by two morning dives on Friday, with an option for a land excursion on Friday afternoon.

Captain Cooke informed us that the ship would be making its way towards the first dive site during the night and that the water might get choppy. I found out the hard way, as I woke up in the middle of the night to take a piss, and I was getting bounced around so hard that I didn't think I could keep my urine stream in the toilet, so I ended up peeing in the shower stall. Sorry, I just had to share that with you.

Tune in for my next post on Day 2, where the diving adventure really begins.

Email ThisBlogThis!Share to TwitterShare to FacebookShare to Pinterest
Labels: Belize

Pissing in the shower. TMI! LOL.

Looking forward to hearing about the Blue Hole. We almost went there, but backed out because it was about an hour and a half by boat, and the choppy sea was giving fits and starts to the women in the group. They didn't think they could do that for an hour and a half.