Yet Again Why Critical Thinking Is Important 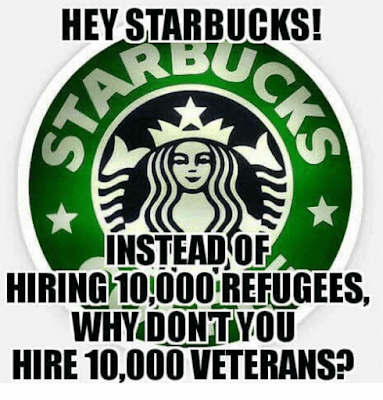 If you, like me, are on Facebook, and you have any wingnut Trumpanzee friends, chances are you saw the meme above pop up on your feed at some point.

Now, if you are what I call a Fright Winger, chances are if you saw this on your Facebook feed, you would click "Like", maybe write in the comments section "Starbucks sucks.  Shame on them" and then share it to your own Facebook feed.

When it comes to me though, I have a different reaction when I read it.  "Does Starbucks have any veteran hiring programs?"  So, I found this search engine I had heard rumors about called Google and in the search field I typed "Starbucks Hires Veterans".  Within seconds, I found this.  Yep, that's right.  Back in 2013, Starbucks announced a commitment to hire 10,000 veterans and military spouses by 2018.  According to more recent information from Starbucks, it has thus far hired approximately 8,800 veterans and military spouses.

But we're not finished yet.  What about those 10,000 refugees in America they are hiring?  Well, according to Starbucks, the refugee hiring commitment applies to the company internationally.  You see, Starbucks has outlets in cities all over the world.  I personally have patronized Starbucks in Hong Kong and Tokyo.  You can go on the Starbucks web site and check for yourself where they have locations.  Two cities I checked were Amman, Jordan and Istanbul, Turkey, two major cities in countries that host among the largest amounts of Syrian refugees in the world.  Sure enough, Starbucks has multiple outlets in those cities.  Starbucks hiring refugees in those cities would count towards their 10,000 refugee hiring goal.

I don't want my tax dollars used to support having refugees living here on welfare!

Companies like Starbucks or Chobani announce plans to provide jobs for refugees.

Why are they giving jobs to refugees when they should be hiring Americans instead?

What becomes clear is that these people have a very zero sum view of the world.  In their imaginations, if Starbucks hires a 25 year old Syrian refugee to work as a barista in the United States, somewhere an exemplary, model American citizen who just needs a break is going to be consigned to a life of poverty and hardship.  "I could have been somebody if it wasn't for that damned refugee!"

The meme above is illustrative of the toxic combination of prejudice and willful ignorance from which unfortunately a great number of my fellow Americans suffer.  And now we have a president in the White House who will be their champion.

Glad to see you're back to posting.

This is a good example (about critical thinking). It's very likely that not a single Trumpanzee who spread this simplistic attack even thought of checking to see if Starbucks did in fact have a program to hire veterans. If they had that kind of capacity for critical thinking, they wouldn't be Trumpanzees in the first place.

Thanks Infidel. Good to be back!

One of my high school friends on Facebook actually challenged me about the refugee hiring being global. He admitted to not doing much research, but didn't see that it was global. So I posted links to three separate articles about how the hiring was global.