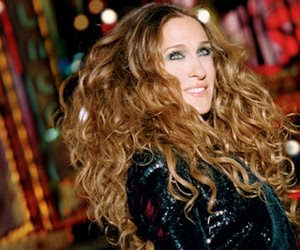 Well, apart from having this prick's picture staring down at me almost every day, a frequent pet peeve of mine is Sarah Jessica Parker.

Whenever I can, I try to walk to my office from Penn Station and back, particularly when the weather is warm. Because Sex and the City is set in New York City, every time a new season of the show was set to roll out, Manhattan would be plastered with huge billboards of Sarah Jessica Parker dressed up as her character Carrie Bradshaw on the show.

Now I am sure that Sarah Jessica Parker is a nice person, but I don't find her remotely sexy. And it appears I am not alone in my opinion.

I'm not trying to be mean. It's just that she sets herself up for this kind of criticism because her image is practically shoved down our throats here in New York. And it never ends!

After the sixth and final season of Sex and the City ended several years ago, I figured, "Finally, I will be spared having to be surrounded by billboards of her." But alas, that was not to be the case, because the following year, the DVD boxed set of the show was released, which generated another wave of billboards. After that died out, again I thought I could breathe a sigh of relief.

Oh, but no, it was not to be. Because the powers that be decided they needed to make a Sex and the City movie, thus generating another series of promotional billboards featuring Parker's Carrie Bradshaw. Come on people! At least throw in a few billboards showing Kim Cattral, who is the only star of the show who has any sex appeal at all.

And while the movie will probably only be in the theaters for a few weeks and the Carrie Bradshaw billboards will eventually come down, I know my torment will not end there. Because I can just anticipate what will happen when the movie is released on DVD and Blu-ray disc in time for the holiday season. Maybe after then I can be free? I doubt it. As sure as the Earth turns, there will likely be a Sex and the City 2.
Posted by Tommykey at 12:48 AM

Yeah, I'm not a fan of the show or the movie of course. I really didn't think she was that sexy either. It's a pain to be bombarded by crap all the time. :)

And of course I put her picture in there just to motivate me to write more posts just so that I can bump it down the page!

I read an article ones where the author said that Sarah Jessica Parker had "the face of a young colt."

I never understood why she was cast as the character of Carrie Bradshaw. I read part of the book Sex and the City that the show is based on and I imagined Carrie to be more glamorous, blond, pretty, well-shaped, etc and sexy. But SJP has the body of a young boy with a horse face. Definitely not sexy.

I do watch the show off and on, cant stand the way Carrie does that squeaky scream. Another thing that is unreal...the four friends are so very different from one another and would never be friends in real life.