The Lure of the Flesh 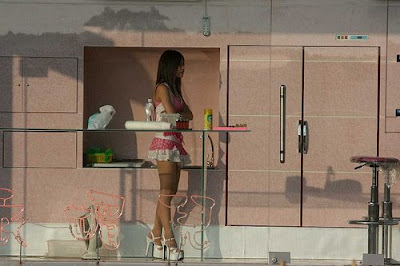 Today, I was reading this post by Vjack at Atheist Revolution about a bunch of Christian busybodies staking out an adult store in Indiana, taking pictures of the establishment's customers and writing down their license plate numbers. It wouldn't surprise me if these busybodies, like Bubba Flavel in Porky's 2, are merely using their outrage to mask their own fascination with "indecency".

Blacksun wrote in the comments section of the post about "a drive-thru cappuccino shop in rural Washington state staffed by bikini-wearing baristas that was closed down. They claimed that the scantily clad women essentially amounted to an "adult business." Of course, since SO many children are driving around to cappuccino shops, they MUST be protected."

I did some searching on Google and while I did not come across the CNN article Blacksun mentioned, this article likely deals with the same establishment. From my brief research on this, it would seem that bikini barista shops are becoming a growing trend in the American Northwest.

Now personally, I don't find anything wrong with drive through coffee shops being staffed by bikini clad ladies, as long as they are at least 18 years of age and their participation is voluntary, that is that refusing to wear a bikini should not be grounds for dismissal. The way I see it, if the coffee at such an establishment is not very good, I doubt male customers are going to keep going back again and again to such places just to catch a glimpse of cleavage. I personally wouldn't go out of my way to be served at a coffee house staffed by buxom bikini clad baristas, but if it was close to where I live or work and I liked the coffee, I would consider the attraction to be an added benefit to patronizing a place I would likely frequent anyway.

From a feminist perspective, there are probably two ways of looking at this. On the one hand, some feminists would argue that using attractive, scantily clad women to sell a product is demeaning to women, while another valid feminist perspective would be that if a woman wants to flaunt her sexuality and feels empowered by it, then it should be her choice to do so. Some people will be swayed to patronize a coffee shop because it has hot bikini babes serving "a cup of Joe," while others will go to another coffee shop because the baristas are not wearing bikinis.

Showing some skin to sell more coffee is one thing, but it is quite another thing when the product being sold could be dangerous to your health. The photo at the top of this post is a picture of a Taiwanese betel nut girl, one of thousands who sell betel nuts from glass encased booths on roadsides throughout Taiwan.

The chewing of betel nuts is common in southern and south east Asia, particularly in India and Taiwan. I first heard of it last year when I was reading a tourist guide book about Taiwan, as I was (and still am) interested in visiting there in the near future. According to the tour guide, "Taiwan now has one of the highest rates of mouth and throat cancer in Asia, a statistic most doctors link with chewing the nut."

From this article from the Taipei Times:

"Before, we only knew that chewing betel nuts could lead to oral cancer and other oral-related diseases," Ko said, "but now we have found that it can also harm other parts of the body."
Ko said that betel nuts have been identified by academics and researchers as a first-class cancer-causing substance. Even though betel-nut chewers spit out the juice, some of it is swallowed and goes into the bloodstream. Arecoline, an ingredient in the betel nut, becomes the residue that stays in the organs.

Alas, efforts to reduce the chewing of betel nuts is running into an obstacle, as this Bloomberg article notes:

The Taiwan government's plan to curb cancer faces tough opposition: about 60,000 women who sit in roadside glass booths, often wearing little more than a bikini, selling the island's oldest legal drug.
The so-called betel-nut beauties, who are unique to Taiwan, peddle the island's second-largest crop to 17.5 percent of the adult male population, according to government estimates.

I believe that in this particular case, there is a legitimate argument in favor of curbing the sale of betel nuts as a public health issue, including discouraging its sale by scantily clad ladies. A product that is a known carcinogen should not be glamorized.

Below is a brief video from Youtube about Betel Nut girls.

Thanks for the link. Clearly, sex sells. There is no way people go to Hooters simply for the food. There is also no way places like this are frequented exclusively by atheists.

Sorry for posting in your comment section, but I couldn't find a way to contact you directly. You might be interested in my blog today; it's a challenge to all Atheist bloggers. The topic is "Atheists: Get out of the Damned Closet!" religionvirus.blogspot.com. -- Craig.

It wouldn't surprise me if these busybodies, like Bubba Flavel in Porky's 2, are merely using their outrage to mask their own fascination with "indecency".

Tommy, this is exactly what I think. They are so fascinated and obsessed with sex and the sexual activities and interests of others that they just can't stop thinking about it, can't stop focusing on it and I think they have a hard time resisting going to these sinful places so whatever they can't resist themselves, they want destroyed. They have no self control and can't trust themselves. They feel guilt for feeling lust and are told it is wrong and that sex is wrong so wiping it out would make it easier for them to deny their human needs, desires and instincts.

Sex sells most everything else, why not coffee?

Generic Viagra (sildenafil citrate; brand names include: Aphrodil / Edegra / Erasmo / Penegra / Revatio / Supra / Zwagra) is an effective treatment for erectile dysfunction regardless of the cause or duration of the problem or the age of the patient.
Sildenafil Citrate is the active ingredient used to treat erectile dysfunction (impotence) in men. It can help men who have erectile dysfunction get and sustain an erection when they are sexually excited.
Generic Viagra is manufactured in accordance with World Health Organization standards and guidelines (WHO-GMP). Also you can find on our sites.
Generic Viagra is made with thorough reverse engineering for the sildenafil citrate molecule - a totally different process of making sildenafil and its reaction. That is why it takes effect in 15 minutes compared to other drugs which take 30-40 minutes to take effect.
[b][/b]
Even in the most sexually liberated and self-satisfied of nations, many people still yearn to burn more, to feel ready for bedding no matter what the clock says and to desire their partner of 23 years as much as they did when their love was brand new.
The market is saturated with books on how to revive a flagging libido or spice up monotonous sex, and sex therapists say “lack of desire” is one of the most common complaints they hear from patients, particularly women.