King Bhumibol of Thailand Is A Dick 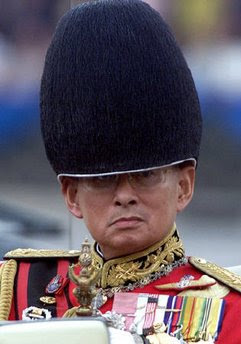 Whatever you do, don't make fun of his silly hat.
To be honest, I don't really have a personal problem with him. I am just expressing my opposition to Thailand's "lese majeste" laws, which makes it a crime to insult the royal family of Thailand.
Now, how serious is this?
From the BBC:
A Thai citizen has been sentenced to 10 years in jail for violating strict laws against insulting the monarchy.
A court in Bangkok said Suwicha Thakho, 34, digitally altered images of King Bhumibol Adulyadej and his family and posted them on the internet.
Thailand's royal family is sheltered from public debate by some of the world's most stringent lese-majeste laws, as the police and army try to suppress what they fear is a rising tide of anti-monarchy sentiment.
One political activist was jailed for six years in November for an anti-monarchy speech she made just a stone's throw from the old royal palace last July.

But this insanity doesn't just apply to Thai citizens. Foreigners in Thailand are also at risk of falling afoul of these laws, no matter how inadvertent the offense might be.

Harry Nicolaides, an Australian writer jailed in Thailand for defaming its monarch, has returned home after being pardoned by the king and set free.

The charges arose from a passage in a largely unknown novel he wrote in 2005, of which only seven of 50 copies printed were ever sold.

Mr Nicolaides was met by his family in Melbourne. He would next see his mother in hospital, his father told reporters.

He told reporters he had been crying for eight hours, having only learnt moments before his flight that his mother had suffered a stroke while he was imprisoned.

So, in the spirit of irreverence, I invite all readers here, Thai and non-Thai, to insult the royal family...just because it should be your right and because you can.

This kind of thing is more common than you might think. Some Spanish authors were fined a heft sum just a few years ago for putting a comic which made fun of the prince on the front of their magazine. Basically, it shows a caricature of the prince screwing his wife saying, in Spanish "Do you realize what this means? If you get pregnant it'll be the closest thing to work I've ever done!"

It's pretty fucking hilarious actually, but the two authors of it were fined about 5 grand each.

I realized that when I read the Wikipedia article and saw that some European countries have such laws on the books too. Thailand is probably one of the more extreme examples, thought.