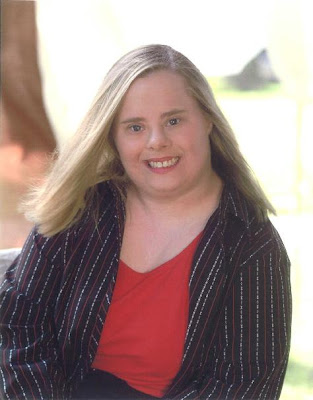 Andrea Friedman, the actress who provided the voice of the character in the recent Family Guy episode that drew the ire of Alaskan ex-governor Sarah "The Quitta from Wasilla" Palin, has issued her own statement on the issue.

My name is Andrea Fay Friedman. I was born with Down syndrome. I played the role of Ellen on the "Extra Large Medium" episode of Family Guy that was broadcast on Valentine's day. Although they gave me red hair on the show, I am really a blonde. I also wore a red wig for my role in " Smudge" but I was a blonde in "Life Goes On". I guess former Governor Palin does not have a sense of humor. I thought the line "I am the daughter of the former governor of Alaska" was very funny. I think the word is "sarcasm".

In my family we think laughing is good. My parents raised me to have a sense of humor and to live a normal life. My mother did not carry me around under her arm like a loaf of French bread the way former Governor Palin carries her son Trig around looking for sympathy and votes.

Of course, what does Andrea Friedman know? She's just part of the liberal Hollywood elite that hates America. But seriously, the New York Times article I linked to above also has an interview with Ms. Friedman.

Thanks to my friend Andrea (not Friedman) for bringing this to my attention and for linking to this blog post.
Posted by Tommykey at 3:12 PM

I think this whole debate is retarded.

What do you know? Andrea Friedman is a lot smarter than Sarah Palin, notwithstanding that she's the one with a clinical condition.

When I had watched the clip, I didn't even know that the actress who did the voice for the character was a person with Down syndrome.

Having seen her picture, I think I have seen her as a guest character in a couple of television shows.