This was our last full day in Belize. There were two dives scheduled for the morning at a site called Amberhead at Turneffe, one at 6 a.m. and the other at 8 a.m. I decided to pass on the last two dives and decided to get an early start on packing for our departure the next morning. 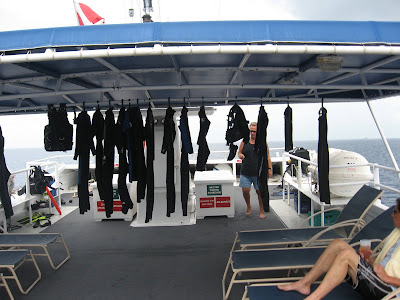 After the morning's dives were done, everyone rinsed out and hung their gear up to dry on the sun deck at the top of the ship. I took the picture above of the wetsuits and BCDs hanging from the bar to capture that sense of finality that the trip was winding down and our diving was at an end.

But while there would be no more scuba diving for us, it did not mean that the fun was over. Marnie, the First Mate of the Sundancer II, informed us of several land excursion options that we could choose from later that afternoon after we had docked in Belize City. I and four others, Sam, Tara, Jeff and Josh, opted for the Cave Tubing trip.

We left around 1 p.m. The drive itself took over an hour into the interior of Belize. At several spots along the road, we were surprised to see groups of rifle toting men in camouflage standing around. One spot in particular was where the road crossed over a river or canal, and we speculated they might be Belizean military or police on the lookout for boats bringing in drugs. Later on, the road became pockmarked with potholes, and our driver had to execute a number of movements to go around them. Finally, we reached our destination. 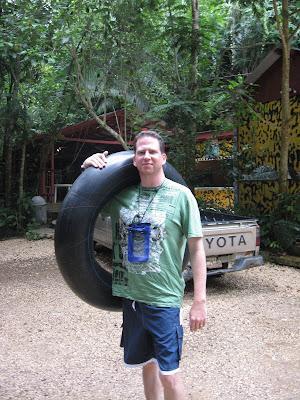 After meeting our guide, we were issued our tubes, and then trekked for about 30 minutes or so through the jungle to get to the river where our tubing adventure would begin. Our guide was emphatic that we avoid touching any of the trees, as some were poisonous, and others had spikes that could puncture our tubes. 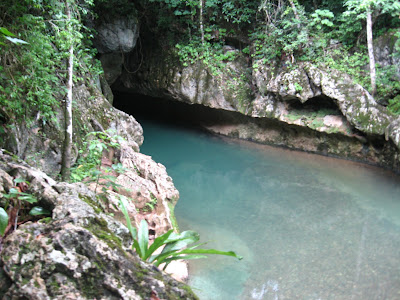 At last we reached the point in the river where we would begin our journey. It was an open part of the river, maybe about 50 yards, sandwiched between two caves. 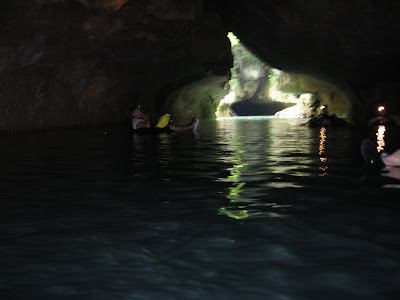 It didn't take long before were immersed in darkness, with only the flashlights strapped to our heads to help us find our way and the current of the river gently pulling us along. 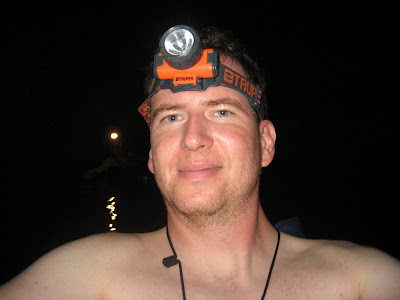 The picture above I took myself just by holding my camera in front of me.

For the first half of the trip we had the cave all to ourselves. In the beginning, we let out a lot of whoops and calls to hear them echo back at us. There were not many formations of interest, owing to the fact, our guide informed us, that during times of heavy rain, the level of the water would rise all the way to the ceiling of the cave.

After about a half hour, we saw light up ahead and the sounds of lots of people, especially children, yelling and laughing as they would jump into the river. It was a large group of people, fellow Americans, I think, who had paused at an area where there was open sky again. As we passed them by, our guide warned us that the rapids were up ahead and to lift our butts up so that they would not get cut by the rocks. At this point we started to move faster as we moved into the next cave.

Unfortunately, the solitude we had enjoyed during the first half was not to last, as the pack of noisy people we had just passed evidently decided to continue on as well. Not long after we entered the second cave, we looked back to see them entering the cave, the shouts and laughter of the children echoing around us. We even had trouble hearing our own guide, who was ahead of us. I joked that it would be great if we had blow guns so that we could puncture their tubes and leave them stranded behind us.

Eventually though, perhaps owing to our fewer numbers, we were able to distance ourselves from our noisy pursuers. Unlike the first section, the second section had a lot of interesting formations. I took pictures of some of them, but because of the dark they did not turn all that well. After a short while, we could begin to hear the roar of the waterfall the guide had told us about. He explained to us that it was in a different chamber, so while the roar became deafening as we got closer, we were not able to see the water fall.

A few minutes after that, we were on the last leg of the journey as we could see the mouth of the cave ahead. The guide drew our attention to the bats in the ceiling above us. I tried to get a picture of them, but to my misfortune, I got caught in a current that diverted me away from them. Finally, I gave up trying to get a picture, put my camera back in the dry bag, and used my hands as paddles to catch up to the rest of the group, who had already stepped out of the water.

The guide took the picture of us below and then we hiked back to meet up with our driver for our return to the Sundancer. 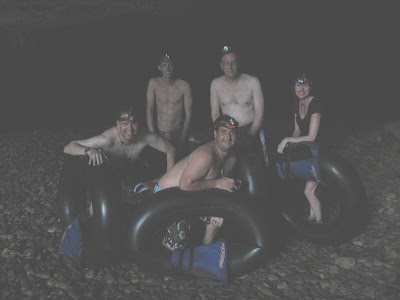 All in all, it was an enjoyable experience, apart from the interlude with the noisy people, not to mention that it was a great way to beat the tropical heat.
Posted by Tommykey at 10:24 PM

Email ThisBlogThis!Share to TwitterShare to FacebookShare to Pinterest
Labels: Belize