May God Protect Those Who Haven't Already Been Hurt or Killed 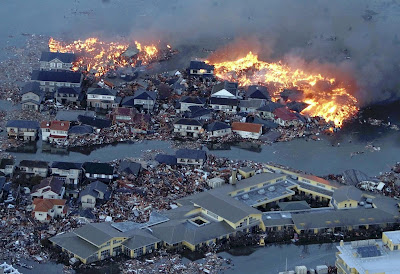 While reading a post on Facebook yesterday about the earthquake and tsunami that struck Japan, the following comments from someone named Eduardo caught my eye:

"May God protect all the people effected by this tragic event. In God we trust."

If Eduardo was expecting God to actually protect people from being injured or killed, I would have to say that Eduardo's trust is greatly misplaced.

Considering that the death toll alone is projected to top 10,000 people, what do people like Eduardo actually expect God to do now? It reminds me of a scene from Harry Potter and the Chamber of Secrets when the narcissistic and fraudulent wizard Gilderoy Lockhart declares that if only he had arrived sooner he could have helped a Hogwarts student who got petrified because he knew just the right counter curse.
Well, the Gilderoy Lockhart in the sky didn't protect the people of Japan from the tsunami. And all the work being done now to aid the people of Japan is being carried out by mere mortal human beings, the way it has always been done in the past.
Posted by Tommykey at 8:43 PM