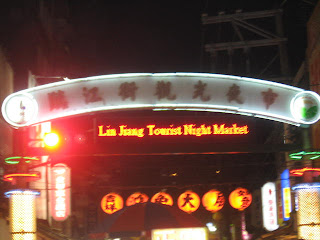 Anyway, the last destination for the day was to hit the Lin Jiang Tourist Night Market on the walk back to our hotel.

For my fellow American readers, a night market in Taiwan is a lot like what we know here in the USA as an outdoor "flea market."  The Lin Jiang night market consists of a stretch of stalls and stands hawking mostly food and clothing items along about two side streets that are closed to vehicular traffic, with the apparent exception of scooters.

While the Lin Jiang night market is not as large or famous as some of Taipei's other night markets, such as the Shilin and Huaxi markets, I picked it because it was conveniently located on the way back to our hotel, and its rather small size made it easy to see it all in a short period of time.  Since it was a Thursday night and it had only stopped raining a short while earlier, the market wasn't crowded either.

My wife used the occasion to indulge her inner Imelda Marcos to visit the clothing and shoe booths.  I looked forward to trying some fried stinky tofu and bought some from the same vendor pictured in Nino's post on the Lin Jiang market.  It was a bit spicy, but I liked it well enough that I would try it again.

While the Lin Jiang market is billed as a tourist market, nearly everyone there appeared to be locals.  There were a few interesting characters, such as the man in the picture below who attracted some onlookers by walking around with his small dog on his shoulder. 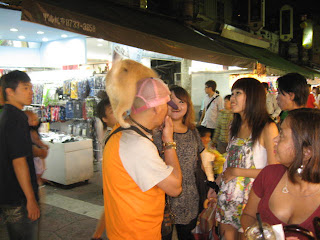 We also found a noodle stand that we would visit again the next night. 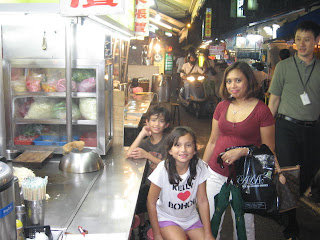 In the background, you can see one of the scooter riders who frequently drove through the market.  I wasn't too happy about this, particularly since I had my two kids with me, as it seemed potentially dangerous to me.  I also can't tell if the man behind my wife is checking out her ass or if something else is drawing his gaze. 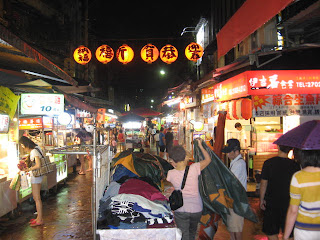 The photo above also gives you an idea of what a good stretch of the night market looks like.   All in all, a night market like this is good for killing a couple of hours.  You get to mix a bit with the locals, try some interesting snacks or "little eats" and maybe shop for a few bargains.

We would return to the night market the following evening as one of my son's sneakers conveniently started falling apart late in the day and we had remembered one of the booths that sold sneakers.