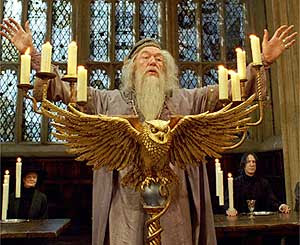 "Oooh. it feels soooo good when I rub against this pole!"

It seems that J.K. Rowling, author of the Harry Potter series, brought Hogwarts head wizard Albus Dumbledore out of the closet. As if paranoid Christian activists didn't have enough reasons for railing against the Harry Potter books already!

Email ThisBlogThis!Share to TwitterShare to FacebookShare to Pinterest
Labels: homophobia

You forgot the Purple Teletubby that got Jerry Fall-ill's religious knickers in a twist.

Tinky-Winky is the purple teletubby Salient!

I think it's great!
I mean, since they protest already, why not give em a bone to chew on! It just exposes the absurdity of these people!

That link that talks about the Christian groups that are opposed to the Harry Potter series... they actually believe magic is real. I guess that makes sense because they believe their God of the Bible is real, too.

This proves that gay people are just regular folks. They can be evil, demon-worshiping necromancers just like anybody else.