By way of an article on the BBC website, researchers studying DNA extracted from the remains of two Neanderthals retrieved part of an important gene called MC1R. The article quotes Carles Lalueza-Fox, assistant genetics professor at the University of Barcelona as saying, "We found a variant of MC1R in Neanderthals which is not present in modern humans, but which causes an effect on the hair similiar to that seen in modern redheads." 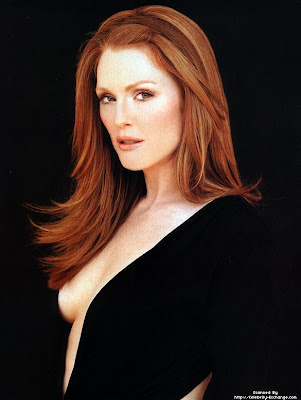 Adds Dr. Clive Finlayson, director of the Gibraltar Museum, "It suggests there may be a propensity towards the reduction of melanin in populations away from the tropics. If the Neanderthal and modern variants are different, it may be a good example of parallel, or convergent evolution - a similar evolutionary response to the same situation."

However, it is not likely that the lovely Julianne Moore has any Neanderthal ancestors. According to Dr. Lalueza-Fox, the Neanderthal version of the gene is not found in modern humans, which suggests that Neanderthals and Cro-Magnons did not breed with each other.

The BBC also has a couple of interesting articles here and here about prevailing theories as to why the Neanderthals were displaced by our Cro-Magnon ancestors and eventually perished in their last refuge in southern Spain. The main causes put forth thus far seem to be a combination of climate change and inferiority to Cro-Magnons either in terms of technology or intelligence. One idea that occurred to me that I did not see discussed is whether it was possible that the Neanderthals may have been susceptible to diseases to which the Cro-Magnons were immune. A stark example of this from recent recorded history is the tremendous devastation that smallpox inflicted on the native American population from the time of Hernando Cortez. I don't know if this possibility was already considered and discarded, but if it has not, maybe it is something worth exploring.

I just want to comment on the photo, MEOW!!
She's my second favorite Ginger Headed Atheist in the world! The first is my wife! :)

Great article though, even if I was distracted the while reading it!

That's an interesting idea (cro-magnon diseases causing the extinction)that I've never heard before, but it makes a lot of sense.

I just did a bit of googling on the topic and it has been discussed, but is not really taken as a serious option. I'm not sure why not.

Thanks for looking so fast Brian. Maybe the disease angle is not considered because they haven't found Neanderthal remains that gave evidence for having succumbed to infectious diseases.

I think it has more to do with the fact that they were both groups of semi-nomadic hunter gathers with similar lifestyles and occupying overlapping territories over a period of a few thousand years. From the archeological record it seems that the neanderthals were gradually replaced rather than quickly decimated.

I'm not sure if skeletal remains would give evidence of infectious diseases like small pox, only degenerative ones.

That being said, disease could have been one of several factors which eventually led to the demise of the Neanderthals.

Tattoed, did you and your wife watch that South Park episode about the ginger kids?

I've never been big on red heads personally, but Julianne Moore is definitely one of the hot ones. She has sexy eyes.

Yes we did, we're big fans of South Park!
You partial to blondes or brunettes?
Me, I've always been a fan of red heads.My first crush was over a red head in first grade!
I wonder if there is a genetic component involved with that? Being that I'm of Scottish and Scandinavian decent! ;)

I'm an equal opportunity admirer Tattoed, though I am partial to Asians and dusky Latinas. A couple of years ago we had a babysitter from Colombia for a couple of months who was utterly devastating in the looks department.

I remember when I first saw her when she came for her interview, the first thought that went through my mind was "YOU'RE HIRED!" However, I had to pretend that I didn't notice how hot she was, which wasn't easy. What do you call those shirts that stop a couple of inches shy of the waist? She wore those frequently.

It broke my heart when she left because she had to go back home to Colombia.