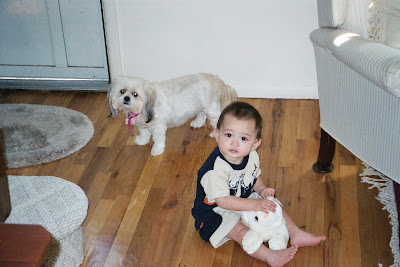 Last night my mom's dog Kiki died. Above is a picture of her with my son when he was about fifteen months old. Kiki was a combination Shi Tzu and Maltese. She was a very cute and friendly dog who was greatly devoted to my mom.
As longtime readers of this blog may recall, at the beginning of this year my mom was hospitalized from pneumonia and injuries sustained from a fall. She spent most of the winter in a nursing home undergoing physical therapy so that she could walk unassisted again. During that time, Kiki stayed with us in our house and became the family dog. In fact, Kiki was with us up to mid-June, because my mom was also having problems with depression and was not up to the task of taking care of her.
But shortly before my family and I were to leave for a two week vacation in the Philippines and Hong Kong, my mom began to feel better again and told me she was ready to take Kiki back. You would think that living with us and being fed and taken care of by us for six months Kiki would have wanted to stay with us. But when I brought her back to my mom's apartment, Kiki went running in excitedly into the den where my mom was sitting on the couch watching tv. Kiki was clearly so happy to see my mom again, and she immediately made herself right at home by grabbing her toys out of her toy basket in the corner. It is really amazing how dogs remain so loyal to their masters even after being separated for so long.
We do not know why Kiki died. The last couple of weeks she had no appetite and would not eat her dinner or snacks, and Kiki was a dog who absolutely loved to eat. Still, despite her lack of appetite, she did not otherwise show any change in her behavior and did not appear lethargic. Then, over the last couple of days, Kiki noticeably deteriorated and my mom had planned to bring her to the vet today. But when my mom woke up this morning, she found Kiki lying motionless on the floor. It was too late.
My mom bought Kiki when she was only a couple of months old and had her for about eleven and a half years. After my father's death at the end of May of 2006, Kiki was the closest thing to a companion that my mom had, so my mom is understandably saddened by her loss. I am going to miss Kiki very much too. I knew I could never be more than #2 in Kiki's eyes, but that was good enough for me. Goodbye Kiki.
Posted by Tommykey at 10:07 PM

hi, i was reading the story about ur moms pet "kiki", smwhere u say u dnt know y kiki died, i jst feel like sharing my view on this, i have seen n observed that, many a times whn u have v loving pets at ur home, tht the whole family loves n they in turn love the family, i have observed that they usually gt effected by any thing negative that is goin to befall on ur family of the owner of the pet, its like they take the effect on themselves, n u may see that the owner becomes allright after that, jst wanted to say its the true love n bonding, i somehow feel like am nt able to explain properly what i mean to the complete extent

I'm saddened by your families loss. We have to wonderful pugs that brighten our day without fail! I sometimes wish dogs lived a lot longer. They are such amazing creatures.

Sorry to hear about Kiki. I know how hard it is to lose a pet. My mom's dog got so old, 18 I think, that he was no longer able to function on a daily basis. She could not bear to go have him put to sleep, so I told her I would. I cried like a baby.

I'm sorry about the loss of your little Kiki.

The sad thing about pets is that their lives are too short. When I just graduated high school, and still lived at home, I bought a dog and named her Pooky. I married and moved away and left Pooky with my parents since they had grown attached and I was going to be living near the Air Base in Arkansas where my hubby was stationed. Pooky died of diabetes when she was 11. My parents and we all grieved. Then they got another dog and named her Honey. Honey was black like Pooky, only more fluffy fur, and 12 years later Honey had to be put down, and my father took that really hard because Honey was such a loyal and loveable dog. Now they have another mutt named Annie who is also black...and is now 11 and having some problems. My almost 80-year-old father is already getting weepy at the thought of losing another beloved pet.

I have a pet Bearded Dragon named Miller. Beardies live about 7-10 years on average. Miller is going to be 7 in the springtime. She already has arthritis and is "sluggish" and slowing down. It's so sad to see animals we get as babies whiz by us age-wise and turn elderly and die in such a short space of time.

I'm sorry to hear that.

I'm sorry for your loss, losing a pet sucks!