The Center of Islamic Stupidity Part 2

Several months after I did this post mocking claims by some Muslims that Mecca was the center of the Earth, I finally got a response from an actual Muslim. His comments were incredibly long and long winded, amounting to a huge steaming turd. I won't reproduce it in its entirety here, you can click on the link above, but the gist of his argument is that plate tectonics proves that Mecca is the center of the Earth. The relevant comments are as follows in green text, as green of course is the color of Islam:

Now , if we use the same approach applied on the Arabian plate , we can say that every thing on and in the earth directs its face to Mecca where the Moslem Kabba lies , this system will go on , according to God's will , to a certain time assigned by God , this accurate unwavering system can't be out of a chance ; it is a supernatural power that made it and is still keeping it going on – that is God , who rose the heavens with unseen pillars.

Well golly gee, let me go get my prayer mat right now and submit myself to Allah and beg for his mercy! How could I possible refute an argument like that?

You see, everything this Muslim commenter says about the Arabian Plate can also be said about the African Plate. Let's look at the visual evidence, shall we? 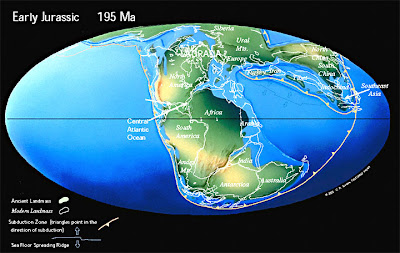 As you can see, this is a map showing the positions of the landmasses approximately 195 million years ago. Only a small portion of the Arabian Plate even sits above water, and that portion is attached to the north east part of the African Plate. As a matter of fact, for hundreds of millions of years, the Arabian Plate was part of the African Plate.

But to be fair, let's look at a map of the world from a more recent period in our Earth's history. 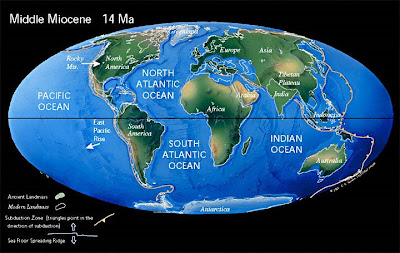 14 million years ago, the Americas, Australia and Antarctica have broken off and have reached close to their present destinations. The Arabian Plate, which is just a minor plate, is only just breaking off from the African Plate after having been a free rider for most of its geologic existence. Notice how all of the other continents have taken up positions around Africa? Africa, unlike Arabia, also sits astride the equator. Africa is also the place from where the first humans emerged. So, as it seems clear to me that the Arabian Plate can't hold a candle to the African Plate.
So nice try there buddy, but I give you an epic fail.
Posted by Tommykey at 10:10 PM

I tried to go back to the original post and read his/her comment.. All I have to say is tl;dr.

I'm with you, geographically, there is no "center" of the earth, other than its core. Wtf?

Center of the Earth? The middle...? lol!

You should check Kafir Girl if you want to see a funny way to look at Islam and the Koran.

Yeah yeah, DO check out Kafirgirl — all of you. *Wink*

I recently watched a YouTube video of some Muslim "scientist" who used this same argument but then added that from outer space, Mecca really DOES look like the "center" of the world. And that the Kaaba emits vibrations that travel all the way through space to heaven where the OTHER Kaaba sits.

I seriously wish I was making that up. I can't remember for the life of me what I searched to find that video, but I'll see if I can get to it again.

Ever read the Flat Earth Society stuff, Tommy? That is some deranged shit.

Hey Andrea. The thing is, flat earthers are marginal and have no impact on policy. Creationists do have an impact here, as well as Muslim fundamentalists in Muslim countries as well.

True enough. Recently posted on the creationist stuff too.

I only mentioned the flat earthers because yesterday was the first time I had actually read any of their stuff and I'm still trying to recuperate...

Uhhhhh, yeah. So what?

With the countless numbers of stones on the planet, it is to be expected that some will have patterns on them.

If that's the best you got buddy, that's pretty damned pathetic.

Hello friend amazing and very interesting blog about The Center of Islamic Stupidity Part 2 I really enjoyed reading this blog and I would like to have any update about it, thanks for sharing!!