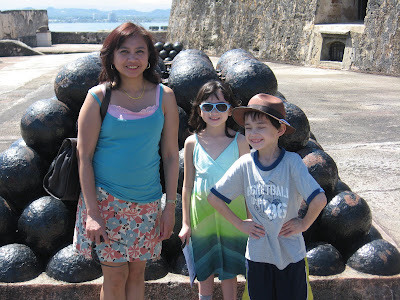 On Tuesday morning, we went on a day trip through the resort to Old San Juan. I was looking forward to seeing the old forts and my wife was eager to do some window shopping. Unfortunately, because someone who shall remain nameless took so long to get ready, we were unable to eat breakfast before the bus was ready to leave at 9:00 a.m. Thus, when we arrived at Plaza Colon in Old San Juan around an hour later, we had to find a place to eat breakfast, which burned up nearly an hour. The closest fort was the massive complex of San Cristobal, which we arrived at around 11:00 a.m. 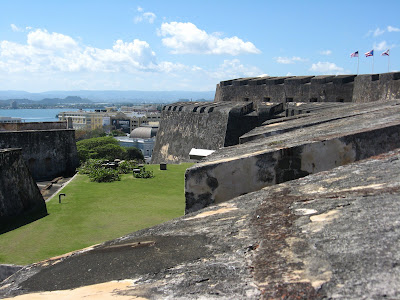 This is an inner wall at San Cristobal that overlooks an outer wall. Thus, if an attacking army managed to breach the outer wall, they would still find themselves facing these ramparts, which in its heyday would have been bristling with cannons. 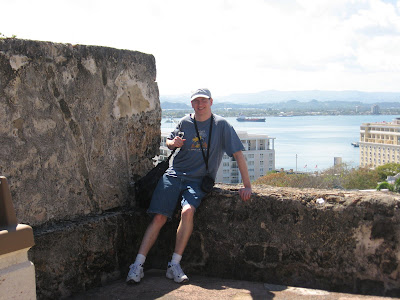 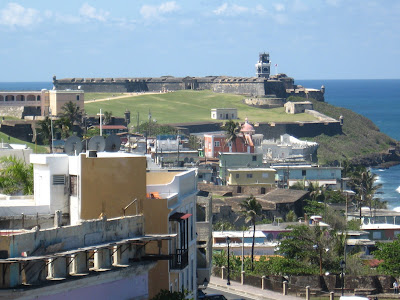 The fortress of El Morro at the tip of Old San Juan, as seen from San Cristobal. Unfortunately, we did not have time to visit El Morro. After we were done at San Cristobal around 1:00 p.m., we ate lunch at some restaurant on Calle Fortaleza. The next thing we knew, it was nearly 2:30, and we needed to get back to Plaza Colon before 3:00 p.m. for the van ride back to the El Conquistador. El Morro and the rest of Old San Juan will have to wait for another visit to Puerto Rico. 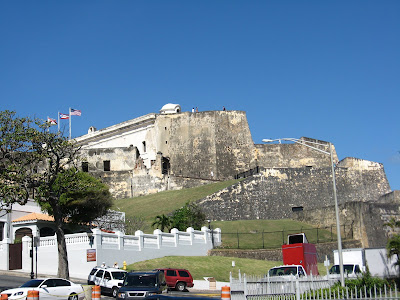 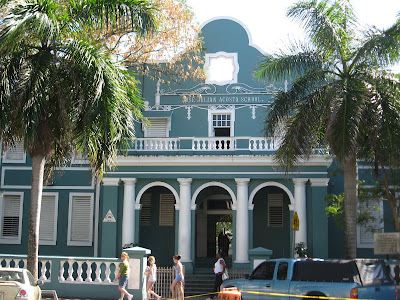 This is a school near Plaza Colon that I photographed because I liked the architectural style of the building. 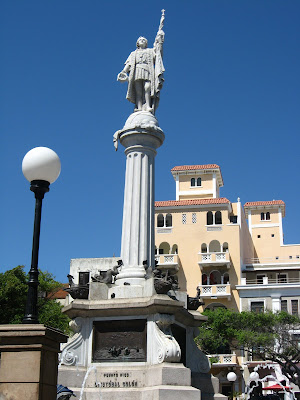 The Christopher Columbus statue in Plaza Colon, honoring a man whose discovery of Puerto Rico was the catalyst for the destruction of the native Tainos on the island.
Posted by Tommykey at 11:06 PM

I love the school, very pretty.

Your son looks like a ham for the camera. :)

Gorgeous photos! The architecture and fortress remind me of St. Augustine, Florida.

BTW, I believe I forgot to mention that I thought it rather amusing, standing amidst all this Spanish colonial architecture and Spanish speaking people, to see a U.S. postal clerk delivering mail on the streets of Old San Juan. It was a visible reminder of the Commonwealth status of the island.