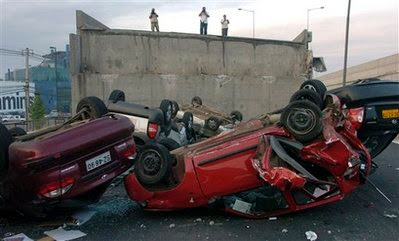 As many of you may know by know, the nation of Chile suffered a terrible earthquake today. From this AP article:

One of the largest earthquakes ever recorded tore apart houses, bridges and highways in central Chile on Saturday and sent a tsunami racing halfway around the world. Chileans near the epicenter were tossed about as if shaken by a giant, and the head of the emergency agency said authorities believed at least 300 people were dead.

The largest earthquake ever recorded struck the same area of Chile on May 22, 1960. The magnitude-9.5 quake killed 1,655 people and left 2 million homeless. It caused a tsunami that killed people in Hawaii, Japan and the Philippines and caused damage along the west coast of the United States.

There were fears that today's earthquake would also trigger a deadly tsunami across the Pacific, including the Hawaiian Islands.

With a rapt world watching the drama unfold on live television, a tsunami raced across a quarter of the globe on Saturday and set off fears of a repeat of the carnage that caught the world off guard in Asia in 2004.

By the time the tsunami hit Hawaii — a full 16 hours after the quake — officials had already spent the morning ringing emergency sirens, blaring warnings from airplanes and ordering residents to higher ground.

"We dodged a bullet," said Gerard Fryer, a geophysicist for the Pacific Tsunami Warning Center in Hawaii.

Now, since a lot of religious nut jobs like Pat Robertson like to claim that natural disasters, like the recent earthquake that killed hundreds of thousands of people in Haiti, are signs of God's wrath, then according to their "logic", two things should be obvious, God loves Barack Obama and hates Chile.

Exhibit A: The earthquake that struck Chile in 1960 and killed over 1,600 people caused a tsunami that killed people in Hawaii. Barack Obama was born in Hawaii on August 4, 1961. Evidently, God caused the earthquake and tsunami to happen before the future president was born so that no harm would come to him.

Exhibit B: The tsunami caused by today's earthquake in Chile did not strike Hawaii. Barack Obama was born in Hawaii and is currently president. God knew that if Hawaii was severely damaged by a tsunami while Barack Obama was president, people like Pat Robertson would interpret it as a sign from God that God was angry with President Obama.

Second, God hates Chile. Since Chile is prone to such powerful earthquakes, God must be angry with Chile about something. But what could it be?

Abortion? Nope, according to this Wikipedia article, "The Chilean abortion law is considered one of the most restrictive in the world."

Lesbian, gay, bisexual, and transgender (LGBT) persons in Chile may face legal challenges not experienced by non-LGBT residents. Both male and female same-sex sexual activity is legal in Chile, but same-sex couples and households headed by same-sex couples are not eligible for the same legal protections available to opposite-sex married couples.

Below are some excerpts from an ex-pat's personal anecdotes on encountering homophobia in Chile's capital of Santiago.

Today in English class in downtown Santiago, I mentioned that Manchester was celebrating Gay Pride. One of my students immediately responded, “I don’t like gays”. She told me that she’d seen a similar parade in Canada and that she hadn’t liked it because there were too many lesbians there. She thought that lesbians were women who “made the decision to be lesbian because they wanted to be fashionable or because they were too ugly to get a man." She said this without shame or without thinking for a moment that anyone might have a different opinion. She was a young, educated woman who firmly believed that homosexual was not something you were, but rather something you decided to be.

It wasn’t the first time I’d come across such blatant homophobia. I recently went out for some drinks with a group of young Chilean university students. During the course of the conversation, I mentioned that I had gay friends. “So you’re gay then?” “No, I just have gay friends”. This took a while to sink in. I talked about Manchester and the fact that gay marriage and gay adoption was accepted in England. The same girl chipped in, “Oh, but gay parents have gay babies”. I asked her how, with that logic, straight parents had gay children, but she didn’t answer. Perhaps she was the daughter of the taxi driver who, during my first month in the city, pointed out two guys together and told me that there weren’t men, they were ‘gays’. Worse still, on the computer terminal in the staff room at work, I was blocked from reading an article on the internet about Germain Greer because it contained the words ‘gay rights’.

So, if it is not abortion or gay rights, what could be the cause of God's beef with Chile? Two words: Michelle Bachelet. Besides being the current president of Chile, Ms. Bachelet is "a pediatrician and epidemiologist with studies in military strategy—served as Health Minister and Defense Minister under President Ricardo Lagos. She is a separated mother of three and a self-described agnostic."

Could God be punishing Chile because He hates Michelle Bachelet?

Exhibit A: Michelle Bachelet was born on September 29, 1951. Therefore, she was alive when the 1960 earthquake devastated Chile.

Exhibit B: Michelle Bachelet is separated from her husband and is an agnostic.

Exhibit C: Her presidential term ends this coming March 10. If God wasn't mad at Michelle Bachelet, the earthquake would not have happened before the end of her presidency.

So, the next time you encounter a Christian who speaks ill of President Obama, remember this post and tell the Obama bashing Christian that he or she is gravely mistaken. God loves Barack Obama. Therefore, to be against Obama is to be against God.
Posted by Tommykey at 11:13 PM

Your logic is, as always, impeccable. :D

1. God loves everyone - including Obama.
2. God does not punish an entire nation because of one person. He is a JUST God, not someone who slaughters hundreds of innocent people. If he was going to punish someone, it would be something to do with that person's life, not everyone around them.
3. God is also very against abortion, saying that hands that shed innocent blood are an abomination and something he hates the most.
4. God is also very against homosexuality or anything that goes against his natural design. He calles them 'unnatural lusts and desires' and clearly states that marriage and love should be between one man and one woman, nothing else.

Witty as usual, but logical. :P