What's In a Name?

In another chapter in the ongoing saga of the so-called "War on Christmas", the New York Times reports (registration required) on a heated school board meeting in New Hyde Park here on Long Island this past Monday night.
The meeting room was packed with local residents expressing their anger over a proposal to change the name of the school's annual Christmas Concert to Winter Concert. Apparently, the Board of Education had already rejected the proposed name change, but the townfolk felt they had to vent their displeasure anyway.
Some of the disgruntled masses went a little over the top in airing their feelings. One compared the school superintendent, who had proposed the name change to make the concert more inclusive, to Osama bin Laden.
Another resident, an attorney by the name of James McHugh, decried the proposed name change as "religious bigotry at its worst."
No, Mr. McHugh, this is religious bigotry at its worst: 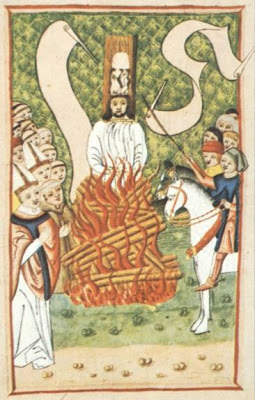 In case you are wondering, that man is Jan Hus, a Czech religious reformer who was burned at the stake by the Catholic Church in 1415 after being found guilty of heresy.

But back to the topic at hand. As our society becomes more diverse, school districts across the country have students whose parents come from non-Christian societies, such as Hindus from India for example. However, Christians are still the overwhelming majority in this country, and it is understandable for some Christians to be upset when they feel that their traditions are not being respected.

Therefore, I propose that the Solomonic solution to this problem is to simply rename the concert the Christmas and Winter Concert, thereby retaining Christmas in the title, while making a nod towards diversity and inclusiveness.

Sometimes we, as people, just make things too hard. Did you send in your suggestion? :)

What's wrong with just calling it what it was, and is-a Christmas Concert?

Well, it is during the winter.

Calling it the "Winter Concert" will INCLUDE the Hindu children, as well as the Jewish, Muslim, and atheist children.

Try getting Hindus in Calcutta to change the name of Maha Sivaratri to "That day when we drink, fast and offer leaves to the Lord".

See how far you get.

Hi Tim. Actually, I am seriously thinking of writing to the superintendent with my suggestion. It just seems like such an obvious solution. I also plan to write a letter to the editor to the NY Times.

Bedrock, what's wrong with calling it a "Christmas and Winter Concert"?

For one thing It's redundant as hell since Christmas always comes in December, obviously "winter" in this country.

For another it's just another transparent liberal segue around a problem that exists only in their atheistic/secular/politically correct/hell bound to unravel over 200 years of tradition in this country/ minds.

I'm sure someone will Google up an isolated exception or two, but by and large those of faith- Christians, Jews, Hindus, Muslims and others- understand and respect each other's rights to celebrate that faith in the traditions they've carried on and lived by for thousands of years.

It's the atheists and secularists-the 5 per centers-who go running to the ACLU with their silly assed problems because they, personally, feel oh, so "uncomfortable" with ANY expression of religious faith at all.

They just use the "ooh look at the poor Hindus, Buddhists, Muslims, etc." canard as an excuse to cover their own tracks, and to mask their stated mission, which is of course to remove any vestige of religion from the face of the earth-or at least in those quarters where they can find comfort and support from fellow atheist/secularists such as the buck shilling subversive nitwits at the ACLU.

But my proposal protects Christmas from being removed by those 5 percenters you like to whine about.

Interesting how bedrock uses the same ACLU, evil liberal-atheist argument for every topic.

He blames it all on the sun."

I think it should be called the Winter Solstice concert, considering the pagan roots of the christian holiday.

I think it should be called the Winter Solstice concert, considering the pagan roots of the christian holiday.

I agree with poodles rule. Some things have to change whether we like them or not.

You folks already have your "Festiveass".

At my school, we called it the Holiday Concert. This covers the major winter holidays of Kwanzhanumas, and it makes sense for others, too, in the British sense of "holiday" meaning "vacation".

My town had a large Jewish population, and we always played or sang some Hannukah songs as well as Christmas carols. It's really not that big a deal.

Hi I like your site and would like to propose a link exchange.
Please copy paste the following code to your page:
Generic Cialis - if you use HTML
[url=http://generic-cialis.socialgo.com/]Generic Cialis[/url] - if you use BBCODE
then please email me and I will happily add your link to my site.