Chapter 2 of Rodney Stark's Discovering God is an overview of ancient temple religions in ancient societies such as Sumer, Egypt as well as the more recent Mayan and Aztec temple religions. From an atheist perspective, there is not much of interest in this chapter. Stark correctly points out that civilizations with subsidized, monopoly religious organizations tended to become static societies where innovation was frowned upon as a challenge and threat to the state religion. Temple religions did not exist to serve the common people, but rather a very small elite. At most, the people might be passive spectators to a publicly performed sacrifice or other ritual. In states that have subsidized religious monopolies, "the overall level of public religious involvement will be low."
This sets the stage for Chapter 3, which looks at religion in the Roman Empire. In contrast to the state subsidized monopoly religions that Stark discusses in Chapter 2, "the most unusual aspect of Roman religion is that it was relatively unregulated and little subsidized. The Roman Republic did not impose a system of state temples and allowed the evolution of a remarkably free and crowded religious marketplace wherein an amazing array of faiths jostled for popular support." Stark calls this the "market theory of religion", which states that religious competition increases the overall religiousness of the population. So far, so good.
However, having made a number of valid observations, Stark proceeds to unleash a broadside against those who claim "that religion stems from ignorance or irrationality." According to Stark, "people are as rational in making religious choices as in making secular decisions." He spends a sizeable paragraph attacking the criticisms levelled against religion by intellectual figures such as Emile Durkheim and Sigmund Freud. That some of the claims by these religious critics are themselves absurd, such as one Michael P. Carroll, who Stark quotes as describing the Rosary as "a disguised gratification of repressed anal-erotic desires", does not make religious belief inherently rational.
Stark retorts that a "mountain of trustworthy studies reveal that religion is positively associated with good mental health - religious people are substantially less prone to neuroses, anxiety, depression, and other forms of psychological problems." (Bold text mine). 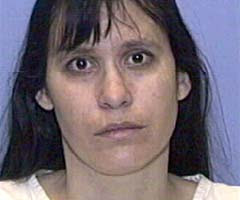 Andrea Yates, a fervent Christian who was not prone to psychological problems.

Yeah, I know, one crazy religious person does not disprove that, but I just couldn't help myself!

Stark goes on though, stating that "the more educated they are, the more likely people are to attend church, and among university faculty, those in the physical and natural sciences are more religious than are their colleagues in other fields." Yet in a recent Harris Poll, it was found that those "with no college education (82%) are more likely to believe in God than those with postgraduate education (73%)." And a Nature survey of the members of the National Academy of Scientists in 1998, found that only 7% believed in a personal god! Maybe the polls that Stark looked at were taken from the faculty of Liberty and Regent Universities!

His bitch session ended, Professor Stark recovers his moorings and gets on with his survey of religious pluralism in the Roman Empire. In examining why new faiths, including Christianity, succeeded in spreading within the empire, Stark offers five reasons for their success. First, these religions appealed to the senses because their ceremonies had a high emotional content. Second, the new religions appealed to the individual rather than the group. Third, "they satisfied the intellect" because they possessed written scriptures. The holy texts of Judaism and Christianity in particular contained descriptions of real places and were grounded, at least in part, in history. Fourth, many of the new faiths were more inclusive towards women. Fifth, the churches and temples of these religions were not just places where people went to worship at set times, they also provided their adherents with a sense of community. In contrast to Greco-Roman religions, "the new faiths stressed celebration, joy, ecstasy and passion. Music played a leading role in their services - not only flutes and horns, but an abundance of group singing and dancing."

And here is where Rodney Stark is right in a way that can be uncomfortable for atheists to admit, Christianity succeeded in the Roman Empire because its message was attractive! This will be examined more when I get to Chapter 7, which looks more in depth at the rise and spread of Christianity in the Roman Empire, resulting in the faith becoming the state religion of the empire in the 4th century C.E.

Ironically though, when Stark describes the shortcomings of the Greco-Roman gods, he points to their lack of morals and manners, and describes them as being "afflicted with jealousy, greed, pride, and lust." Evidently Stark forgets that in Exodus, the god of the Bible tells Moses that he is "a jealous god", and throughout the Old Testament, the god of the Bible at best is psychopathic, genocidal, and controlling. Of course, the story of the birth, ministry, crucifixion and resurrection of Jesus is meant to humanize the god of the Bible and make him, well, less of a dick.
Posted by Tommykey at 10:19 PM

Nice post.
He also failed to note that those with higher IQ's also tend to be less likely to believe in a personal god. Or find religion of any importance.

Yes Christianity was accepted in Rome, but its rise in acceptance correlated with the decline of the Roman Empire. People become more likely to turn to a faith that promises happiness when things are going to shit. (Kind of like what's happening in our country) This is for a few reasons. One of them being that failing economic conditions gave rise to ignorance and superstition. (Although the Romans were a superstitious lot to begin with) As conditions in the cities deteriorated, people became more rural, and less educated, thus more likely to succumb to Christianity. Also Constantine replaced pagan relics with christian ones. Later Theodosius I, made it the official religion of Rome, thus forcing it upon the rest of the population of the empire.