The Canyons of Mars 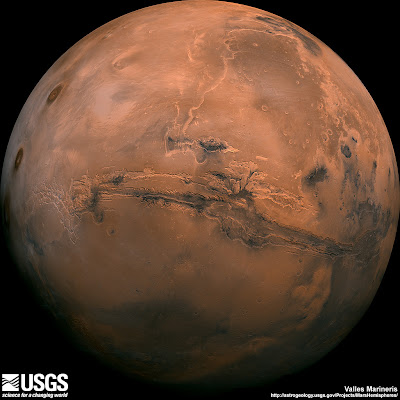 Pictured above is the Valles Marineris canyon system on Mars. As the NASA web site helpfully explains:

Valles Marineris, or Mariner Valley, is a vast canyon system that runs along the Martian equator just east of the Tharsis region. Valles Marineris is 4000 km (2500 mi) long and reaches depths of up to 7 km (4 mi)! For comparison, the Grand Canyon in Arizona is about 800 km (500 mi) long and 1.6 km (1 mi) deep. In fact, the extent of Valles Marineris is as long as the United States and it spans about 20 percent (1/5) of the entire distance around Mars! The canyon extends from the Noctis Labyrinthus region in the west to the chaotic terrain in the east. Most researchers agree that Valles Marineris is a large tectonic "crack" in the Martian crust, forming as the planet cooled, affected by the rising crust in the Tharsis region to the west, and subsequently widened by erosional forces. However, near the eastern flanks of the rift there appear to be some channels that may have been formed by water.

The reason this interests me from an atheist perspective is that creationist fundies insist that the Grand Canyon in the American Southwest had to be formed from the Great Flood described in the Book of Genesis.

A prominent expounder of this nonsense is Tom Vail of Canyon Ministries.

On his web site, he tells how he "left the corporate world behind and became a career rafting guide, leading trips through the Grand Canyon ever since." It was while leading one of these tour groups in 1994 that "Paula, a passenger on a trip shared Christ with me. A few months later, I received Christ as my Lord and Savior and Paula is now my wife. In 1997, the concept of Canyon Ministries was born and we ran our first Christ-centered rafting trip through the Grand Canyon. Since then, we have shared the Canyon from a Biblical perspective with hundreds of people. We have been selected by both Answers in Genesis and the Institute for Creation Research, as well as several other organizations, to provide charter services for their Grand Canyon tours and research trips."

Vail now claims "that the creation model of the Canyon made more sense, was easier to believe and answered more questions than the evolutionary model." He purports to show "how the effects of Noah’s Flood, not millions of years of erosion, carved the Canyon." His book, "Grand Canyon: A Different View" is apparently still for sale at gift shops in the park's bookstores, in spite of protests by geologists for the National Park Service, as well as others who complain that it amounts to a national park promoting the viewpoint of a specific religion.

I would be interested to hear how Vail and other young earth creationists would explain Valles Marineris. If a geological formation on Mars can be formed entirely through natural processes, then how can they be so cocksure that the same kind of forces were not responsible for creating the Grand Canyon on Earth? What alternatives are there? Was there a race of Martian Sodomites wiped out in a great deluge on Mars that the Bible does not tell us about?

What I find fascinating as we continue to explore the other planets of our solar system and the moons that orbit them is that our discoveries help to inform our understanding of our own planet's history. To the people who wrote the books that would eventually comprise what we know today as the Bible, the planets were nothing but points of light in the sky that were not fixed like the stars. The Biblical authors had no conception that these planets were bodies that orbited the sun and that most of them had moons of their own.

From Bible times to the present day, religious people tend to believe that volcanic eruptions represent some manifestation of an angry god's wrath, and yet the most volcanically active body in our solar system is Jupiter's moon Io. The last time I checked, Io was uninhabited, so there is nobody living there for god to be pissed off at. As we observe and study violent geological and meteorological phenomena on other worlds that also occur on Earth, it should become abundantly clear that these are forces that occur naturally rather than being signs of god's displeasure over gays or the teaching of evolution in our public schools.
Posted by Tommykey at 10:37 PM

You know, despite the fact that I used to believe in all that creationist nonsense, I'm getting to the point where I really don't understand how somebody can think like that anymore.

Jupiter also has a massive storm system that has been raging across the surface of the planet for the past four hundred years (the big red spot). The next time somebody tries to tell me that god controls the weather I'll have to ask them about it.

I never get any answers back from creationists when I bring up weather on Jupiter, canyons on Mars, etc. How god manages to control all aspects of this vast universe while tending to the equivalent of microscopic life forms on a speck of a planet in just one of the billions of galaxies in the universe. They just avoid those questions altogether and go into their magical incantations.

At some point, it's no more challenging that shooting fish in a barrel. Almost no sport left in pointing out the stupidity of the creationists.

But I suppose its necessary to keep kicking them, since they keep insisting on imposing that nonsense on rational people.

Brian said,You know, despite the fact that I used to believe in all that creationist nonsense, I'm getting to the point where I really don't understand how somebody can think like that anymore.

I am thinking the same thing. It seems ridiculous sometimes to the point of wanting to yell at someone!

Tommy, this is old news but...

Washington, DC — Despite promising a prompt review of its approval for a book claiming the Grand Canyon was created by Noah's flood rather than by geologic forces, more than three years later no review has ever been done and the book remains on sale at the park, according to documents released today by Public Employees for Environmental Responsibility (PEER).

“In order to avoid offending religious fundamentalists, our National Park Service is under orders to suspend its belief in geology,” stated PEER Executive Director Jeff Ruch. “It is disconcerting that the official position of a national park as to the geologic age of the Grand Canyon is ‘no comment.’”

Thanks Barbie. I came across that story while doing research for this post. I read that it is a problem in a lot of national parks, including Mammoth Cave National Park in Kentucky, which I would be interested in visiting sometime this year.

"I would be interested to hear how Vail and other young earth creationists would explain Valles Marineris. If a geological formation on Mars can be formed entirely through natural processes, then how can they be so cocksure that the same kind of forces were not responsible for creating the Grand Canyon on Earth?"

Just something to consider when looking at creation through Biblical eyes. Scripture declares that God made man, not as an embryo, but as a mature man. The same logical conclusion can be drawn that God's other creations in the beginning would be born with "mature" looks about themselves, meaning though the appearance would show a great amount of time, the actual time passed would have been very little.

Not really meant for argument, just thought I would mention it since you posed the question how could one explain the Valles Marineris.

Thank you for your comments. I had anticipated that line of response.

My counter-question then would be -how do you know then that God didn't create the Grand Canyon the way it was before the flood? How can you really tell then what existed at the creation and what formed afterwards? After all, the events in Genesis seem to be concerned solely with events in the Middle East. Apart from a few Viking explorers, nobody in all of Europe, Asia (excluding Eskimos that lived on both sides of the Bering Strait) and Africa were even aware of the existence of the Americas, let alone the Grand Canyon. How do you know the Canyon wasn't formed by a localized flood caused at the end of the Ice Age when an ice dam melted an unleashed a rush of massive amounts of water across North America?

It also does not seem to make much sense for God to create planets and moons in our solar system that display massive cratering from meteor impacts. What's the point of that? It's no coincidence that bodies in our solar system that show heavy cratering also have very little or no atmosphere or tectonic activity. When you consider that, it is many times more plausible that the conditions of these moons and planets made them more vulnerable to meteor impacts, rather than that God made these worlds to look like they were hit by many meteors.

"My counter-question then would be -how do you know then that God didn't create the Grand Canyon the way it was before the flood? How can you really tell then what existed at the creation and what formed afterwards?"

Speaking of the flood, Scripture declares, God "spared not the old world, but saved Noah the eighth person, a preacher of righteousness, bringing in the flood upon the world of the ungodly;" [2 Peter 2:5]

But yes, it would be just as easy to say God made the Grand Canyon as is, as it is to say He made it by using the natural means of the flood. But, the "old world" was destroyed according to Scripture, so anything we see would be post-flood.

"How do you know the Canyon wasn't formed by a localized flood caused at the end of the Ice Age when an ice dam melted an unleashed a rush of massive amounts of water across North America?"

As a Christian, this would still be considered a direct act, or willed act by God through nature upon His creation, but again post-flood would be necessary if to stay true to Scripture.

"It also does not seem to make much sense for God to create planets and moons in our solar system that display massive cratering from meteor impacts. What's the point of that?"

It may not make much sense to us, because we don't have the mind of God. But all of this has given man excitement, interests, jobs, and enjoyable hobbies has it not? Do we not do things for our children and/or pets that others may think "What's the point of that?" yet we do it nonetheless.

So, why did/does God do it? Why do we do it? Simply because we choose to.

It may not make much sense to us, because we don't have the mind of God.

I'm sorry Tim, but that line just does not work for me.

The more we explore the cosmos, the more it becomes apparent that ours is just an incredibly small part of a much larger story. And it is plainly obvious to me that the Bible offers no meaningful insight into that story. We are just going to have to agree to disagree on that.