I Rode The Subway With Randall Flagg Today 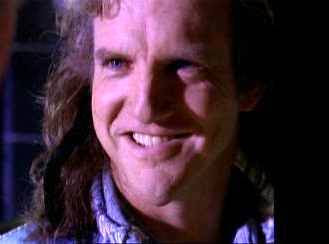 Well, I'm pretty sure it was him I saw today, actor Jamey Sheridan that is. When I got on the subway at Rockefeller Center this afternoon to go to Penn Station, he was standing near me talking with another man that I did not recognize. Sheridan was dressed in plain clothes and wearing a Yankees baseball cap. Of course, he looks much older now than he did when he played the diabolical Randall Flagg in the tv miniseries adaptation of Steven King's The Stand, with his short hair now completely white. Sheridan is also familiar to fans of the television series Law & Order: Criminal Intent for his role as Captain Deakins for a couple of seasons.

I was probably the only person in the subway car, apart from the guy Sheridan was riding with, who recognized him.
Posted by Tommykey at 9:14 PM

I know he's in the area filming. Saw a job ad somewhere for his assistant.

I loved The Stand. Cool you got to see Flagg. :)