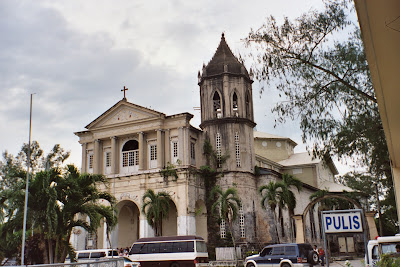 This church is located in the town of Dauis on Panglao Island, just a few minutes drive outside of Tagbilaran City. The Dauis Church, according to my travel guide, was built in 1784. Like many of the churches on the island, it is built of sturdy stone and is accompanied by a watchtower (in this case, the watchtower is in back of the church). The people of Bohol would often have to take refuge in the churches when sentinels on the watchtowers spotted Moro raiders coming up the channel from Mindanao.

My wife's sister Mia was married in this church on June 26, 2004, and I took this photo after the ceremony was concluded, if memory serves. Unfortunately, the church being over 200 years old, it did not have air conditioning! My son, who was only three at the time, had a major tantrum after the mass had ended, having to suffer through the ceremony in a tuxedo.

Even if you are not religious, like me, the churches of Bohol are still interesting to visit both for their architectural beauty and their historical significance.
Posted by Tommykey at 10:51 PM

Email ThisBlogThis!Share to TwitterShare to FacebookShare to Pinterest
Labels: Bohol

What a beautiful church. The architecture (from your photo) is magnificent.

I love churches. Some of my faithful friends chide me occasionally that as an atheist, churches shouldn't intrigue me (or they say that god is trying to entice me into belief (I figure they are about 10% serious, so its fun)). One of my favourites is the adobe church in Pecos, NM. I think it dates back a couple of hundred years, but I'm not sure.

I find modern churches (including my parents UU church up in Maine) to be uninspiring. Give me arched windows, vaulted ceilings, flying buttresses and ostentation any day. The new ones look like gilded warehouses.