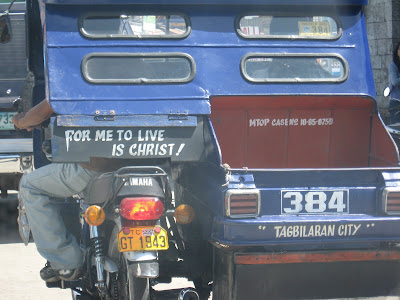 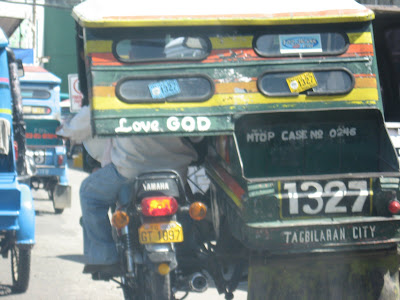 For an atheist, one of the things that one observes almost immediately, aside from the tremendous poverty, is the pervasiveness of religious expression in the Philippines. And while I have seen only a small part of the country, nowhere have I seen the Catholicism of the Philippine people expressed more fervently than in Tagbilaran City, capital of the island province of Bohol.

This expression of religious belief extends to the tricycles pictured above, virtually all of which contain some sort of religious message in Tagbilaran City. These tricycles, which consist of a small motorcycle or scooter attached to a metal cab, function as a common form of transportation for the city's poor and lower income people. During a day trip to the interior of Bohol, I did notice that the frequency of religious messages on the tricycles diminished the further one traveled from Tagbilaran.
Posted by Tommykey at 12:04 AM