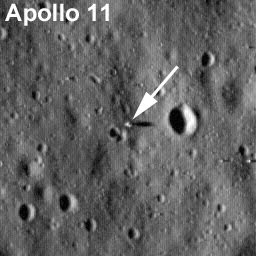 I don't know why I didn't read about this when it happened this past July, having just noticed an article about it on the BBC web site today.

What's really cool is that as we and the other space faring nations of the Earth, such as China, Japan and the EU send more probes to orbit or land on the moon, we will get even better pictures of the Apollo landing sites.

I'm curious as to how the moon landing deniers are going to handle this. They have two options if they wish to maintain their disbelief, (1) to deny the veracity of the photos, which will be harder to do if probes launched by other countries also send back photos of the sites (like China is really going to be in on the conspiracy!), or (2) claim that NASA secretly dumped replicas of the Apollo lunar modules on the surface of the moon to provide bogus evidence to fool people about something that happened decades earlier. 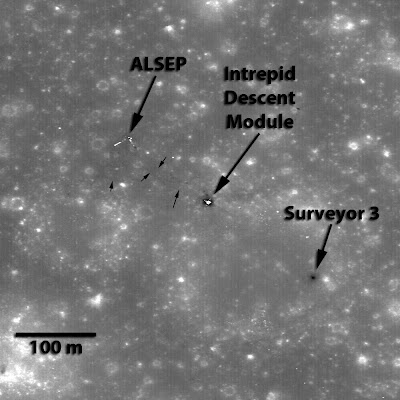 What's really amazing, as you can see (barely) in the picture above from the Apollo 12, are the trails left by the astronauts themselves, which are indicated by the smaller arrows.

Who knows, maybe a hundred years from now the Apollo landing sites will become museums.

Hooray! I Finally Got My Computer Back!

Though it might be another day or two before normal blogging activities resume.
Posted by Tommykey at 9:36 PM 3 comments