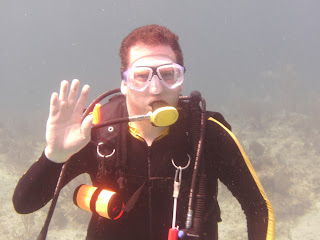 This year, the destination for our group's annual summer scuba diving trip was the Little Cayman Beach Resort on the island of, well, you probably guessed it, Little Cayman.

Unlike the previous two diving trips I went on, which were on liveaboard boats, this time we would be staying at a resort on the land, except of course when we went diving.  Also, this time I took the entire family with me.  I told my wife they had a spa and a hot tub, which was all she needed to hear.

One improvement over last year's trip was that our flight was out of JFK airport instead of Newark.  Since my wife and I both had monthly LIRR passes, we decided to use public transportation to get to JFK while the rest of the group either drove or paid to ride in a van.  Most of the gang from last year's trip was in attendance, Larry, Sue, Tara, Nina, Jeff, Ira, and Bruce.  Also joining us was Jeff's son David, George, who the rest of the group knew from the Honduras trip that I didn't go on in 2010, Dick, who I remembered from the Belize trip in 2009, and a newcomer named Chris, who was one of Larry's recent students.

The flight down to Grand Cayman went rather quick and smooth, about three hours.  We then had to wait the better part of the afternoon for our connecting flight to Little Cayman.  If I recall correctly, it was originally scheduled to depart around 2:30, but didn't end up leaving until 3:45.  The flight to Little Cayman was very short though, about 45 minuters, and we got to the resort around 5 p.m.

In the lobby, we each took turns getting our room keys and filling out the necessary paper work.  After the wife, kids and I got settled into our room, I went down to the resort's resident dive shop, Reef Divers, to complete their required forms.  When I returned to my room, as instructed, I left my dive gear in a gear bag outside by the front door.  We were in one of the Oceanfront rooms on the second floor, with a balcony facing towards the beach to the south.

Our first evening was rather uneventful.  We ate dinner and my two kids made the most of the resort's small pool.  The next morning, after breakfast was served, would be diving time.

Posted by Tommykey at 8:53 PM 0 comments

A Couple of Random Observations


Some of my fellow atheists like to point out that if God is punishing America with tornadoes and hurricanes and so forth because he is angry with us for things like gay marriage, abortion and secularism, then why do these natural disasters frequently afflict parts of the country where so many Gawd fearin' types live.

After all, if God hates homosexuals, then why not cause gay men to spontaneously combust whenever they engage in acts of sodomy?  Why not strike down abortion providers with bolts of lightning whenever they are about to perform an abortion?

Then I had that "Eureka!" moment.  There's a reason why God afflicts the good Christians of America with natural disasters.  And that is because he is just like the drill sergeant in the movie Full Metal Jacket.   When Private "Pyle" continues to mess up in spite of the drill sergeants constant badgering and cajoling, the drill sergeant tries a new tack, as shown in the scene in the Youtube clip above.  He announces to the platoon that he will no longer punish Pyle for his mistakes.  Instead he will punish the rest of the platoon, which causes them to beat poor Private Pyle with bars of soap wrapped in towels.  Consequently, Pyle becomes a better Marine, well, at least until he ends up shooting the drill sergeant and then himself.

So maybe that is why God punishes the Bible Belt states of America with wild fires, droughts and other natural disasters.  They are not doing their job to get the rest of us sinners right with Jesus.  He is just trying to motivate them to try harder to ban abortion, roll back same sex marriage and eliminate access to contraception.  If that is the case, I think God needs to give them some more motivation.

On a different note, I recently received the 25th anniversary edition of Condé Nast Traveller magazine.  The magazine has a fold out page with some travel related facts, including comparison of some statistics from 1987 and 2012.  For example, in 1987, there were 701 million rolls of camera film sold in the United States, whereas just 15 million rolls were sold in 2012.  While the number of rolls of film sold has obviously plummeted, the year 2012 still had 5 months left to it as the magazine went to press, so the total for the year could go up to maybe 25 million.

The foldout section also lists the five highest and lowest states by percentage of population with passports.

The five highest states by percentage are:

And the five lowest states by percentage of the population are:

The top five states are all located in the northeast of the United States.  I was surprised that California didn't make the the top five, as I would imagine that states with a high percentage of foreign born U.S. citizens would be more likely to have a greater percentage of passport holders, as foreign born Americans and their families would travel frequently to their countries of origin.

The bottom five states are mostly rural with less ethnic and religious diversity in their populations. Citizens of these states also travel abroad less, which also minimizes their exposure to peoples of other cultures.    Maybe that is what Sarah Palin meant when she spoke of those little pockets of what she called the "real America."
Posted by Tommykey at 10:53 PM 1 comments

When you walk the streets of Manhattan, it's not uncommon to see some street corner preacher type bellowing out Bible verses and exhorting people to accept Jesus.  While I find it slightly annoying, it's tolerable when you are just walking by and will soon be out of ear shot of windbag for Jesus.

This morning at the Hicksville train station was a different situation.  I had ascended the platform and made my way towards the middle to catch the 7:57 AM.  The 7:57 is a double decker train that is much shorter than the rest of the train, so you have to walk all the way to the middle of the platform just to be able to be in position to enter the rear car.

Anyway, seconds after finding a spot to stand and await the train, I hear not to far from me a man talking in a loud voice.  I looked to my left and saw a young Asian man holding a Bible in one hand and reading out loud to no one in particular.

I sighed and walked over to him.  I don't recall my exact words, but in general I tried to tell him that he was making a nuisance of himself because he wasn't taking into consideration whether or not the other people on the platform wanted to hear what he had to say and that most of the people within the range of the voice already knew what the Bible was anyway.  He stopped to listen to me and for a brief moment, I thought my entreaty had gotten through to him.  However, no sooner had I walked back to where I had previously been standing before he resumes his Bible bloviating.

I let out an even louder sigh, more of a groan actually, and after about a minute I walked back to him again.

I tried a different tack this time.  I explained to him that some of the people on the platform were Jews, Muslims and Hindus and that it was insensitive to their feelings that they should have to hear him when they were basically a captive audience.  Because they were waiting for their train, they had no escape until the train pulled in. Asian Preacher Man replied what he was doing was motivated by love.

"Maybe to you it might be," I replied, "but that is not how they perceive it."

I asked him how he would feel if a Muslim started preaching from the Koran outside of his church, though in retrospect, a better example would be if the Muslim bellowed his Koran verses at Asian Preacher Man and his friends at their church picnic at a public park.  He didn't really respond to that and I don't remember what else he said.

I continued by acknowledging that I understood how he felt, that he believed he was in possession of some wonderful truth that he felt he had to share with the rest of the world.  I pointed out to him that reading from the Bible in public didn't accomplish anything useful and that his time would be better put to helping to feed homeless people or picking up litter.  Unfortunately, at that moment, the train was pulling in to the station and the sound of it would have drowned out any further conversation.  I shook his hand and told him that I wasn't trying to put him down but just to try and make him understand that he should take other peoples feelings into consideration.

I stepped into the train car without looking to see if he was getting on too or if he was going to remain behind to continue with his Bible reading.

While I doubt I swayed him from conducting any repeat performances in the future, I can still hope that I had an impact.

Though it isn't exclusive to religious people, it can't be denied that quite a few individuals, pumped up by their zealous faith, seem to feel it gives them a license to make a public spectacle of themselves.  The atheist equivalent would be to stand outside of a church and accosting people on their way to and from mass, telling them that they're wasting their time and that the god they pray to does not exist.  That would be an incredibly dickheaded thing to do.

The vast majority of us just want to go about our daily business without being disturbed by others.  I don't think it is too much to ask for.

Posted by Tommykey at 9:45 PM 2 comments

From Bangladesh, more evidence that being a devoutly religious person doesn't result in your God enveloping you in some kind of magic shield to protect you from harm.

"At least 13 devotees have been killed by lightning outside a mosque in northeastern Bangladesh.

Local police chief Bayes Ahmed says 20 other people were injured by the lightning late Friday in Sylhet district. The victims were struck by the lightning as they were exiting the mosque following special prayers tied to the holy month of Ramadan."

How To Tell Your Religion Was Created By A Man

Here is Augustine on the creation of the human race:

"Therefore, God created one sole individual, not that he was meant to remain alone deprived of human companionship, but in order that the unity of society and the bond of harmony might mean more to man, since men were to be united not only by the likeness of nature but also by the affection of kinship.  God did not even wish to create the woman who was to be mated with man in the same way that He created man, but, rather, out of him, in order that the whole human race might be derived entirely from a single individual."*