Those of you who follow the news may have saw or read about the 7.2 magnitude earthquake that struck the Central Visayas region of the Philippines this past October 15, with the epicenter of the quake being the center of the island of Bohol.

Had my life taken a different path nearly two decades ago, this particular earthquake would likely have been no different to me than any other natural disaster to afflict a country thousands of miles away.  Brief moments of sadness and maybe a donation to a disaster relief organization if the damage and death toll were particularly severe, only to fade away and be forgotten.

In this case though, the quake affected me personally because Bohol is the island where my wife grew up and where her family lives.  I have been there three times in the last ten years and the wife, kids and I were planning to visit again next summer.

The good news, to cut to the chase, is that the family there are safe and unhurt.  The house of my sister-in-law Mia and her husband Stuart was badly damaged and is uninhabitable for the time being, though Stuart seems to believe that the damage can be repaired.

The death toll at present is below 200, with some hundreds more injured.  The physical damage is far greater, with the island's infrastructure severely damaged.  Bridges have collapsed, roads have been buckled, and buildings destroyed.  It will likely take some time before the island looks like it did before the quake, and I imagine that there will be some kind of effort to enforce stricter building standards to make structures more resistant to quakes.

One class of buildings that has suffered considerable damage, and in some cases virtually complete destruction, is Bohol's many Spanish colonial era Catholic churches.

Among those churches is one that has some personal resonance with me, the Dauis Church, which I did a blog post on nearly 6 years ago.  It was the church were Stuart and Mia had their wedding ceremony on June 26, 2004.  Below is a picture of the Dauis Church I took on the day of their wedding. 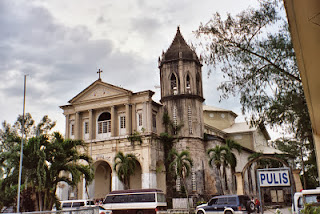 And here is how it looks now. 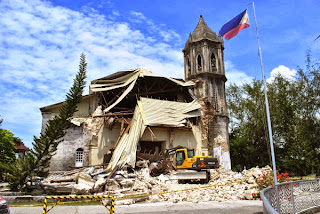 As you can see, most of the front of the building's façade has crumbled, though the tower looks largely intact.  I haven't seen pictures of the sides and back of the church, so I don't know how widespread the damage is.  Other churches, particularly the Baclayon and Loboc churches, have been largely destroyed.

Granted, as an atheist, I would rather that a hundred churches (unoccupied, of course!) crumble to dust than lose a single hospital for treating the sick and injured.  In this case though, the Dauis Church has a sentimental value for me, as it was the setting for a joyous occasion in our family.  And as I wrote in my original post about the church, I can appreciate such places for their historical and cultural importance as well.

It Takes A Sick Day To Start Blogging Again

Yeah, it's been nothing but crickets here for the last three months, probably my longest dry spell ever.  It hasn't been for want of topics to blog about but finding the time.  Well, today I'm home sick and have the house to myself, so I am all out of excuses.  Here we go!
Posted by Tommykey at 10:45 AM 1 comments