Some three dozen people were killed yesterday during a stampede at a train station in Allahabad, India during the Kumbh Mela festival.  The festival is described as "the largest religious gathering on earth" which takes place every 12 years "on the banks of the 'Sangam'- the confluence of the holy rivers Ganga, Yamuna and the mythical Saraswati."

So, what happens at this Hindu religious festival?

From The New York Times article linked to above:

"Those who bathe in the conjoined waters are cleansed of their sins and given blessings that extend through several generations, Hindus say. Pilgrims make the trip not just for themselves but for their children and grandchildren.

N. K. Auddy, a consulting engineer from Kolkata, was taking part in his first Kumbh because his daughter recently gave birth to his first grandchild, and he was hoping for a divine blessing for the child. “I want him to have a good future,” Mr. Auddy said."

If Mr. Auddy's grandson is to have a good future, he'll be better served by having a loving, supportive family, access to a good education, clean drinking water and decent health care.  I don't see how bathing in a river with millions of other people, which is not particularly sanitary, is going to provide a better future for his descendants.
Posted by Tommykey at 11:09 PM 1 comments

The Tragedy of the Rhino 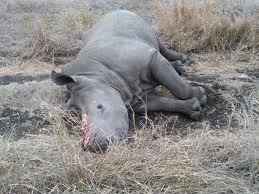 Since at least from the end of the Ice Age about 12,000 years ago, the human race has had a growing impact on the natural world.  We have expanded into virtually every area of the globe, cutting down forests, draining swamps, turning fields into farmland, fishing the oceans and building factories that have spewed pollutants into the atmosphere.
By sheer virtue of the size of the population of the human race, which is now counted at over seven billion people, we simply can't help but have a negative impact on the Earth's ecosystems and the other species that inhabit them.  On land, we have encroached on the habitats of numerous species, while the weapons in our assault on the oceans have included overfishing and the release of our sewage and agricultural runoff to create oceanic deadzones.  Then there is the threat of global warming.
We're a veritable bull in a china shop, destroying so much around us.  Even the most environmentally conscious of us realize that while we can take steps to mitigate the damage, it is simply impossible for humanity to stop all or most of it, unless we are all prepared to commit mass suicide.
We take it for granted that the decline of most forms of wildlife and the loss of natural wilderness is the unavoidable collateral damage caused by the dominance of our species on this planet.  Still, we cannot help but be shocked and outraged when an animal finds its very existence imperiled because of the misguided beliefs of a significant number of people.
The animal in question here is the rhino and the threat to them comes from increased poaching due to a recent and rising demand for rhino horn powder in Southeast Asia, particularly Vietnam.  The chart below, from the wildlife trade monitoring network TRAFFIC, displays annual death tolls for rhinos in South Africa. 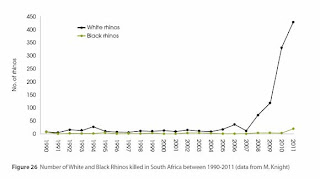 This Conde Nast Traveler article on the rise in rhino poaching notes that "[t]his current poaching spike, which follows years of relative calm, began in 2008 after a Vietnamese government official claimed to have been cured of cancer after taking rhino horn."

For centuries, the powder from ground rhino horns have been a staple of traditional Chinese medicine.  Rhino horns are composed mostly of a protein called keratin which can also be found in the hair, skin, and nails of humans, along with horse hooves and the horns of other animals.

"Overall there isn’t much evidence to support the plethora of claims about the healing properties of the horns. In 1990, researchers at Chinese University in Hong Kong found that large doses of rhino horn extract could slightly lower fever in rats (as could extracts from Saiga antelope and water buffalo horn), but the concentration of horn given by a traditional Chinese medicine specialist are many many times lower than used in those experiments. In short, says Amin, you’d do just as well chewing on your fingernails."

According to TRAFFIC, "Four main user groups have been identified in Viet Nam: the principal one being those who believe in rhino horn’s detoxification properties, especially following excessive intake of alcohol, rich food and 'the good life'. Affluent users routinely grind up rhino horn and mix the powder with water or alcohol as a hangover-cure and general health tonic."

From TRAFFIC's report The South Africa-Viet Nam Rhino Horn Trade Nexus, "Collectively, this group personifies the cultural concept of 'face consumption', whereby extravagant usage of something rare and expensive becomes a means to flaunt wealth, status and success amongst friends and associates.  These consumers probably account for the greatest volume of rhino horn used in Viet Nam today... Popular websites drive this usage with an endless stream of slick come-on slogans: "to improve concentration and cure hangovers", "rhino horn with wine is the alcoholic drink of millionaires", and rhino horn is "like a luxury car".
In a possibly dismal foreshadowing of what awaits the rhinos of Africa, the last Javan rhino in Vietnam, which lived in Cat Tien National Park, "was shot and had its horn removed in early 2010."

South Africa is home to the majority of the worlds remaining rhinos,  But as The New York Times reports, sadly, "The number of rhinos poached in South Africa has soared in the past five years, from 13 killed in 2007 to more than 630 in 2012. The prehistoric, battleship-gray animals are often found on their knees, bleeding to death from a gaping stump on their face."

Having identified the problem, the question is what can be done to solve it?

One idea that has been proposed is legalization of the trade.  Why not raise rhinos specifically for the purpose of harvesting their horns?

The Conde Nast Traveler article quotes an Albi Modise, spokesman for the country’s Department of Environment Affairs, who points out that "There are now potentially three billion end users of rhino horn [in Asia] and only 21,000 rhinos left in South Africa.”

Unfortunately, there is no magic bullet.  Putting a stop to the slaughter requires addressing the trade in rhino horns along the entire trade chain, from making it harder to kill rhinos to changing the attitudes of consumers of rhino horn powder in Vietnam and other Asian countries so that the demand is reduced.  That could take years, during which rhinos will continue to be decimated.

An idea that occurred to me was flooding the market with a counterfeit product.  Is it possible to fool consumers by selling them keratin powder made from alternate sources while slapping a picture of a rhino on the packaging?  There are ethical considerations though to such an approach, particularly when Western governments and businesses press countries like China and Vietnam to crack down on counterfeiting of American and European products.  If it is wrong for China to tolerate counterfeit Viagra, for example, then it may seem hypocritical to them for us to promote counterfeit rhino horn powder just because we think it is a worthy cause.

One day, the large scale poaching of rhinos will come to an end, either because we were successful in stopping it, or because there will be no more rhinos left to kill.