A Death in the Philippines 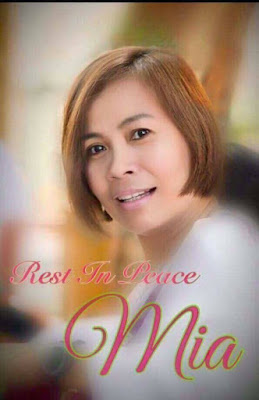 This is probably the most difficult post I will ever have to write on this blog.  My sister-in-law Mia Mascarinas-Green, who was an attorney in the province of Bohol in the Philippines, was brutally assassinated in front of her own children on February 15, 2017.

While it is not uncommon to read such stories in the news, most people never expect such a terrible thing to happen to someone they personally know, love and admire.  Mia was one of those people to me.  I first met her in the fall of 2003 when she stayed at our house for a week.  Before that, I had spoken with her on the phone several times.  I had a feeling before we even met that we would get along very well, and I was proven right when we finally met in person.  She had an easy going and likeable personality and we clicked from the start.  My wife Mae and I took her sightseeing to several places, including the Montauk light house and a Broadway showing of the musical Aida.

We would see her again less than a year later when we traveled to the Philippines in June of 2004 for Mia's wedding to Stuart, a UK national.  Stuart worked with local fishermen and elected officials in the province of Bohol to educate them about sustainable fishing and ending such destructive practices as dynamite fishing, which destroyed the very coral reefs that attracted fish to the local waters.  It was a very eye opening trip for me in many ways.  Apart from a few days in Canada, it was the first time I was outside of the United States.  I was in an environment totally unfamiliar to me, a developing country where one could see both clusters of corrugated tin shacks and fancy resorts.  I had the opportunity to get to know more of my wife's family.  It was Stuart, Mia's husband, who would inspire me to take up scuba diving.

Owing to the distance and costs involved, our visits to the Philippines were often spaced years apart.  We would make return visits in 2007, 2011 and 2015.  A number of blog posts were dedicated to the 2007 and 2011 trips, but the last visit was during a period when this blog was dormant. 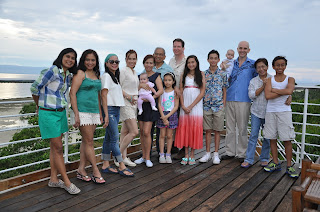 During our July 2015 visit, Stuart and Mia had a family party at their house in Loon.  Stuart hired a professional photographer to take pictures of us.  The photo above was taken on an elevated deck in their backyard overlooking the Strait of Cebu and the island of Cebu in the background.  Mia is the one near the middle in black holding her infant daughter Zia with her eldest daughter Zoe beside her, with her husband near the left end in blue holding the other twin, Eli.  This and other photos taken during this time are haunting to me in retrospect, because these are the last photos to have been taken of the entire family.  Mae's father (standing behind Mia in the photo above) was about to be treated for prostate cancer, so the trip had a certain poignancy in that we had braced our children for the possibility that it could be the last time they would see their "Lolo" Jose again.  It never would have occurred to me that it would in fact be the last time we would see Mia again.

I won't delve too deeply into the circumstances of Mia's death.  In short, she represented a woman named Conrada Blomqvist Otero in a dispute with Otero's son-in-law Lloyd Lancer Gonzaga over ownership of a resort on Panglao Island (a smaller satellite island of Bohol) called the Alona Embrace Resort.  Apparently fearing that he would lose the case in court, Gonzaga thought it would be a wonderful idea to murder Mia.  On the afternoon of February 15, while Mia was driving home to Loon with her three children and their nanny sitting in the back, Gonzaga and three of his goons on tandem motorbikes, forced her to stop.  Gonzaga and one of his accomplices then fired at Mia multiple times, striking her in the head and neck.  You can read the horrifying details of the attack here. 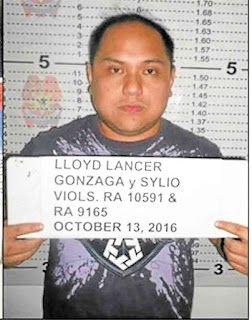 The photo above is of the evil scumbag Lloyd Lancer Gonzaga.  It was taken after his arrest at a previous incident that took place outside of Mia's office last autumn.  At present he and his accomplices are still at large.  While he was quickly identified by witnesses, including Mia's daughter Zoe and the nanny, by the time the police decided to raid Alona Embrace resort, Gonzaga had already gone into hiding.  There have been accusations that the police deliberately delayed attempting to capture him because they either fear him or are in his pocket, as Gonzaga's family, which hails from the same Davao region as current Filipino president Rodrigo Duterte, is rather wealthy.  It is a sad reality in the Philippines that powerful business and political families employ armed goons who will murder their opponents.  Environmental attorneys and activists are often targets of such violence.

Mia was a very well known and respected attorney in Bohol province, and many people there are outraged about her murder and are determined to insist that justice be done for her.  This tribute to Mia, penned by someone who knew her both as a fellow student and then as a teacher, really paints a picture of the wonderful person that she was.

I'm still in a state of shock over this, though as the days pass I find my grief giving way to anger.  Part of me still can't believe that this actually happened and wonders if maybe this is just a bad dream.  But it really did happen.  And what makes it even more tragic is how pointless it was.  Gonzaga gained nothing by having Mia murdered.  He is now in hiding and the resort is presumably closed down.  What he murdered to keep is no longer his.  I'm reminded of the scene near the end of the movie Fargo when Margie has Peter Stormare's character in the back of her police car.  As she's driving, she is recounting to him the people who have died and says "And all for what?  A little bit of money.  There's more to life than a little bit of money ya know.  Don't you know that?"

We all expect that people we know, whether family, friends, coworkers and acquaintances, will die at some point, whether due to accidents or illness.  I lost a high school friend who perished in the Twin Towers on 9/11 and had met a handful of others who died there as well.  But there is something about the murder of a loved one that affects you like no other death can.  Mia is dead because someone made a deliberate decision to riddle her with bullets in front of her own children.  It shakes me to my core.  At the risk of sounding a bit dramatic, I feel as if a part of me died in that van with Mia, the part of me that believes that the good and the just can prevail and the wicked are punished.   When I told my daughter what happened to her aunt Mia, the first thing she said was "Why is it that the good people die and the bad people get away with it?"

There is a scene in one of my favorite movies, LA Confidential, when Guy Pearce's character, Ed Exley, tells his colleague Jack Vincennes, played by Kevin Spacey, the reason why he became a police officer.  Exley's father, also a police officer, was killed while off duty and the person responsible was never found or identified.  Exley gives him a name, Rollo Teemasi, and explains to Vincennes that he decided to become a police officer because he wanted to catch the ones, like Rollo Teemasi, who thought they could get away with it.

The one hope I have now with regard to the murder of Mia is that Lloyd Lancer Gonzaga and his accomplices will not be among the ones who get away with it.  I have to admit that a part of me wishes that I could douse them with gasoline and light them on fire.  But the rational part of me wants them arrested, tried and sent to prison, because it is important for Filipino society that the system holds the powerful and the connected with responsibility for the crimes that they commit.  A vigilante killing of someone like Gonzaga, as emotionally satisfying as it might be, would not serve that purpose.

I loved my sister-in-law Mia and will miss her for the rest of my life.  She was a bright shining light in the world that was tragically snuffed out.  My wife and I used to talk about getting a house in Bohol and living there part time once we were retired.  I don't feel that way now.  Bohol will be an emptier place without Mia.

In conclusion, I hope that someone reading this post knows where Lloyd Lancer Gonzaga is and will report it to the authorities so that he can be arrested.   Justice demands no less.