The Catholic Curse of the Philippines - The Origin

A popular object of religious ridicule for a lot of us atheist bloggers is the annual Good Friday ritual in the Philippines wherein a number of extremely devout Filipino Catholics have themselves crucified in imitation of what they believe to be the sufferings of Jesus Christ.

I did a post last year on this topic, when Australian television personality Jonathan Safran participated in the crucifixion ritual in the Philippine village of Kapitangan and then found himself in trouble when the villagers learned that Safran had himself filmed undergoing the ordeal for a television comedy.

As I have remarked in previous posts, a lot of Filipinos are hard core in their Catholicism. It is quite common to see a small area of the house set aside for displaying all kinds of religious paraphernalia such as pictures of Jesus and the Virgin Mary, as well as candles and other such items. When Filipinos buy a new home, they have a priest perform a house blessing ceremony. In my wife's hometown of Tagbilaran on the island of Bohol, nearly all the jeepneys and tricycles have religious themed stickers or signs on their backs.

So, how did things end up this way?

Recently, I read a book about the voyage of the Portuguese navigator Magellan, who in the service of King Charles of Spain, attempted to sail west to reach the Spice Islands. The book, Over The Edge Of The World by Lawrence Bergreen, is well written and worth a read. When I read the following passage on page 43, describing the Spanish city of Seville, from whence so many of Spain's expeditions departed, I immediately thought of the Filipino crucifixion rituals:

[Seville] was also a city of faith, the home of the third largest church in the world, after Saint Peter's in Rome and Saint Paul's in London...The flame of the Catholic faith burned most brightly in Seville during Semana Santa, Holy Week, lasting from Palm Sunday to Easter Sunday, when solemn, almost frightening processions of religious penitents coursed through the city's narrow, winding streets and capacious squares. The penitents walked barefoot over the sharp stones and splinters embedded in the streets, bearing a wooden cross, their feet bleeding, displaying their wounds in emulation.

So, it seems, one can draw a line through time and space, from the village of Kapitangan in the Philippines to the 16th century city of Seville in Spain.
Posted by Tommykey at 11:02 PM 4 comments 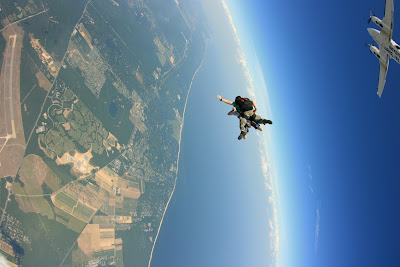 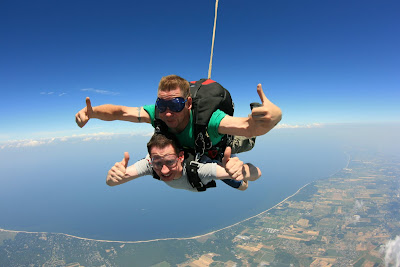 This past Sunday, I did something I had been interested in doing for quite some time now but never really made the effort. I went skydiving, or more specifically, tandem skydiving.
In what is a good example of how opening oneself to new experiences paves the way for other opportunities, my scuba diving trip to Belize last summer made it possible, as my roommate Sam on the Belize trip organized the skydiving trip and sent me an invitation that I was all too happy to accept.
We did our skydives at an outfit called Skydive Long Island out in Calverton on the east end of Long Island. There were twelve of us in our group in all. Since the planes could only take four customers at a time, we were split into three groups of four.
The first group consisted of myself, Sam, his girlfriend Diana, and his friend Chris. We each paid to have our jumps shot on video. Because my video guy was delayed for some reason, my instructor and I were the last to get on the plane which meant that I would have to be the first in our group to jump.
So, our small plane took off, with the four of us each getting hooked up to our tandem instructors. There was one seat for one of the videographers, with the other three crammed into the space at the back of the plane. When we got to jumping altitude, about 13,500 feet, the door was opened. My videographer asked me for any last remarks and then climbed out onto the side of the plane to film my exit.
Because of my height, I had to walk hunched over, taking small steps because I had to keep pace with my instructor who was hooked up behind me. I smiled at the video camera as the wind blasted by us. Then, peering down at the ground so far below us, I found myself really facing for the first time the reality of jumping out of an airplane. For a brief moment I paused and then out and down we went.
Freefalling is such an absolutely incredible and terrifying experience. You feel the rush of the cold air as you find yourself plummeting at 120 miles per hour, causing your cheeks to ripple. After what may have been 2o seconds, the videographer came into position in front of us, which meant giving the obligatory thumbs up and okay signs. Then the instructor signaled and the videographer veered off as our parachute deployed and we came to a sudden, wrenching stop, with the harnass unhelpfully digging into my groin. I watched as the videographer sped away and rapidly descended towards the ground so that he could be in position to film my landing.
It was then that I had the chance to really take in and admire the views of the Long Island Sound and the land below me. The instructor asked me if I liked roller coasters, to which I responded in the affirmative, whereupon he caused us to go into a rapid spin. It was fun, albeit slightly nauseating. He repeated the experience for me again about a minute later, and then we gently descended to the grassy field that ran parallel to the landing strip.
When we touched down on the ground, I had this feeling of tremendous elation and if given the option, I would have gladly gotten on the next plane up and jumped again. I felt this strange sense of empowerment in having put myself through a genuinely frightening and potentially very dangerous experience and coming through it unscathed.
Just prior to the jump, the videographer pointed the camera at me and asked me if I had any last words. I had intended to look directly in the camera and declare "There is no god!" But I balked, if only because I did not know the religious beliefs, if any, of the videographer and the instructor in whose life I placed my hands. Plus, I thought, the last thing I needed was the instructor possibly trying to mess with me by telling me the parachute wouldn't open while freefalling just to see if I would cry out "Oh God! Please don't let me die!"
So, I decided to keep my godlessness to myself. But I experienced the terror of freefalling without calling on any deity to protect me. And I look forward to my next jump.
Posted by Tommykey at 9:43 PM 6 comments