Posting has been light here lately. There's a lot of things I wanted to write about, but either couldn't find the time or just was unable bring myself to sit down and type away at my keyboard.

One of the hot topics in the NYC area right now, and which has gotten a lot of attention nationwide, if not worldwide, is the so called "Ground Zero Mosque." As someone who lives near and works in Manhattan, and who knew people who died at the World Trade Center on September 11, 2001, this is a subject that is personal to me.

But before I could write about this in an informed way, I felt it was important that I went to see for myself the World Trade Center site and the location of the proposed Muslim community center and mosque two blocks away on Park Place. Yesterday, I had the opportunity to do so, as I was going to downtown Manhattan to see a showing of an independent film that featured one of my friends from high school. I decided to take the No. 2 subway line down to Chambers Street before heading to the theater.

From Chambers Street, I walked south for five blocks down West Broadway, passing Park Place along the way. The site of the former Twin Towers is still cordoned off with a chain link fence, with most of the fencing covered, making views of the ground difficult. I took the picture below through one of the openings. 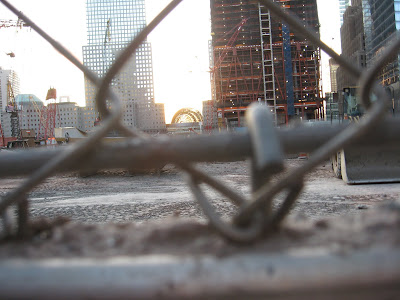 I then headed north up Church Street. I took the shot below from the corner of Church and Vesey Street, the latter of which runs from east to west on the north side of the WTC site. 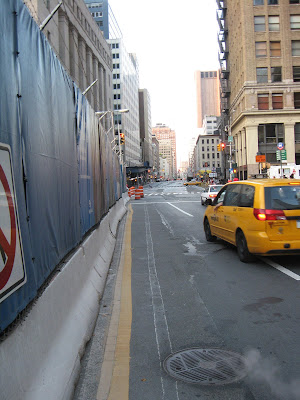 The next shot is on Church Street between Vesey and Barclay Street, with the Federal Office Building to my left. 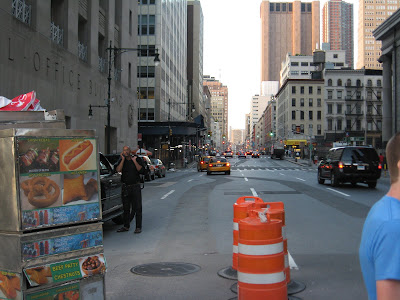 Below is the intersection of Church Street and Park Place. To reach the section of Park Place that will house the proposed community center, one must turn to the left. 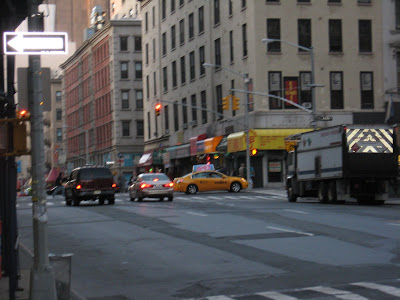 Below is the 51 Park Place building, which is to form part of the Cordoba House. It is located on the north side of Park Place between Church Street and West Broadway. One thing that should be noted is that while the World Trade Center site is very close by, it is not visible from this location. On the south side of Park Place directly opposite is a large building, and the next block down, between Barclay and Vesey is the imposing Federal Office Building. 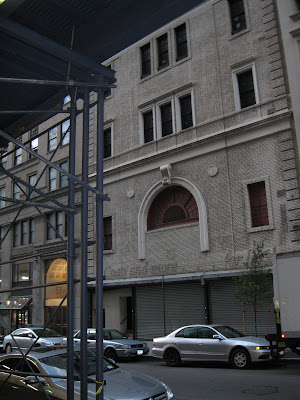 On one side of the proposed center is this Amish Market, which is on the corner of Park Place and West Broadway. 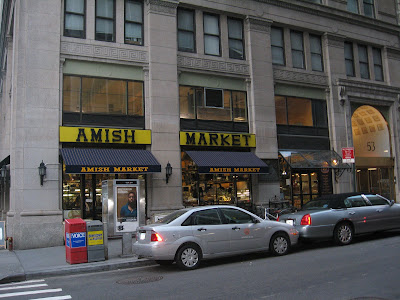 In order to be able to see the WTC site, one has to stand on the corner of Park and West Broadway looking south. 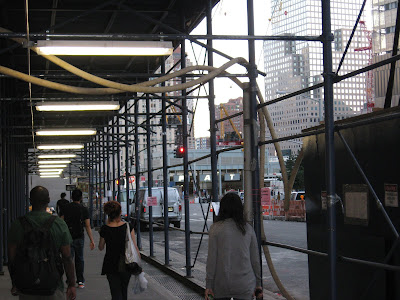 Now I know some people have put out snarky proposals like opening gay bars or strip joints next to or across the street from the proposed Cordoba House. However, as the (blurry) photo below shows, there already is a bar called the Dakota Roadhouse that stands next to the proposed center. So, if the Cordoba House, or Park51, does eventually come to fruition, pious Muslims coming and going will have to pass by an establishment that serves alcohol. 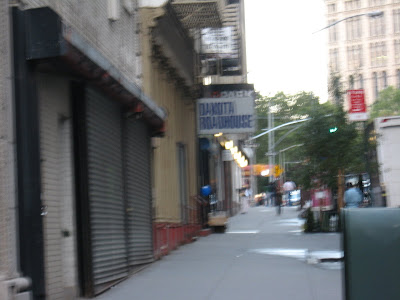 But it gets even better than that. The next block north after Park Place, on the north side of Murray Street, is a "gentlemen's" club called New York Dolls. If Cordoba House will have a rear entrance on the south side on Murray Street, Muslim men leaving their prayer services will find themselves facing the temptations of the flesh. 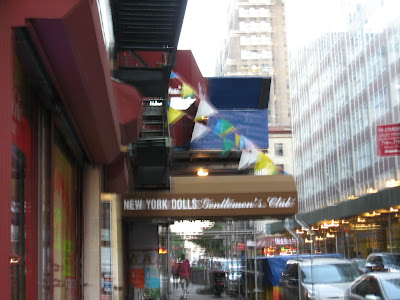 Now, onto the matter at hand. What do I think about the proposed community center and mosque? As an atheist and someone who knew or was acquainted with people who died at the Twin Towers on September 11, 2001, it would be easy to reflexively bash Cordoba House. But while I think all religion is basically superstitious nonsense, as an atheist, I also understand that an important barometer for any nation is how well it treats its minority populations, including religious minorities. I can cynically join with some American Christians in condemning a Muslim center near the World Trade Center while knowing that some of those very same Christians view me as un-American because I am an atheist. I'm sorry, but I just can't do that.
As I wrote in a post recently about proposals in some countries to ban the wearing of the veil, often what we think about certain issues says a lot about us and how we choose to view them. Some opponents of the community center/mosque claim that it is a symbol of Muslim conquest because it is being built close to the site of buildings that were destroyed by Muslim terrorists who believed they were carrying out the will of Allah. But in order for that to be true, one would have to provide evidence that the organizers behind the center provide moral, physical and/or financial support to al-Qaida. Absent that, why choose to frame the issue in this way?
One can certainly ask the developers of the center why they chose the location. Here is what Sharif El-Gamal, a Manhattan developer and owner of the property has to say:
"Prior to purchasing our current facility at 45 Park Place, there were two mosques in lower Manhattan, although Park51 is not affiliated with either of these mosques. One was Masjid Farah, which could fit a maximum of approximately 65 people, and had to hold three or four separate prayer services on Fridays just to fit the crowds.

The second mosque, at Warren Street, accommodated about 1,500 worshippers during Friday prayers - people had been praying on sidewalks because they had no room. They lost their space around May 2009. We made the move to buy 45 Park Place in July 2009 in part to offset the loss of this space. Currently, our space at 45 Park Place, accommodates around 450 people every Friday. We are also easily accessible from many different parts of Manhattan, Brooklyn, and Staten Island, which was an important consideration."

Warren Street is four blocks north of the World Trade Center site. So, until May of 2009, over a thousand Muslims had been praying at a mosque on Fridays a mere four blocks from "Ground Zero" and apparently nobody noticed or cared. But somehow, the prospect of Muslims gathering to pray two blocks away from the WTC constitutes some kind of national crisis.

Lest anyone forget, some of the people who perished in the Twin Towers on 9/11 were themselves Muslims. You can look them up on any list of the victims. To name a few, there's Shabbir Ahmed, who was a waiter at Windows on the World. Tariq Amanullah was a vice president at Fiduciary Trust International. Mohammed Salahuddin Chowdhury, also a waiter at Windows on the World. Mohamed Jawara, a security guard. Khalid M. Shahid, a systems administrator at Cantor Fitzgerald. Mohammed Shajahan, a computer administrator at Marsh & McLennan. There are others, but I believe I made my point.
Another argument thrown out by opponents of the center is that Saudi Arabia, which contains within its borders the Muslim holy city of Mecca, does not permit churches or synagogues. But as Jon Stewart said on the Daily Show, "Is that going to be our standard now? Saudi Arabia?" To be fair, it is a legitimate issue that Saudi Arabia should permit people of all faiths to worhip freely in that desert kingdom. But by permitting Cordoba House to be built so close to the World Trade Center site, doesn't that give us the moral highground to condemn lack of religious freedom in some Muslim majority countries?
As I wrote above, one measure of a nation's worth is how it treats its religious minorities. Since we find ourselves locked in a conflict with jihadist terrorists, an important part of winning that conflict is to win the hearts and minds, or at the very least, not incur the hostility of, the majority of Muslim people who form the sea in which the terrorists swim. How we treat our own Muslim-American population is an important component of winning this conflict. I fear that when a number of our politicians whip up hysteria over Cordoba House, along with opposition to mosques and Muslim community centers in other parts of the country, it damages our moral authority. Furthermore, if we are to treat Muslim-Americans as part of some vast, mindless Orc horde who just want to kill us, we can create a self-fulfilling prophecy as numbers of them conclude that America will never accept them. Why should Muslim-American citizens and legal residents, a large number of whom are African-Americans who have ancestors in this country going back several centuries, be tarred with the same brush as foreign jihadi terrorists?
One thing I have noticed from my readings of history is that nations that whip up hatred towards their religious minorities do so when they are in decline or suffer a loss of confidence. A society that embraces tolerance and pluralism is a confident and strong society. If we capitulate to the Sarah Palins and the Newt Gingriches and the other fearmongers, I believe it will show that we are weak and fearful.
Would I have preferred that the Cordoba House not be at Park Place? Yeah, I guess so. But if they own the property and they received the approval of the local community board and the zoning authorities, then it doesn't matter what I think. And if Cordoba House finally gets built and opens its doors, I think I'll celebrate the occasion with a beer at the Dakota Roadhouse.
Posted by Tommykey at 8:36 PM 17 comments

Imagine If He Was An Illegal Alien From Mexico

A totally not-racist Israeli Arab-Christian* citizen and legal US resident was arrested at an Atlanta airport on suspicion of having stabbed 18 people, 15 of whom were black, with 5 of the victims dead.

My favorite line from the linked article comes from the suspect's mom.

"Elias, my son, is a religious, God-fearing man who always assists anyone who needs help."

* Updated to clarify that the suspect is not Jewish, as merely identifying him as an Israeli citizen might erroneously imply that he is Jewish.
Posted by Tommykey at 10:03 PM 3 comments