Justice In The Philippines: A First Step 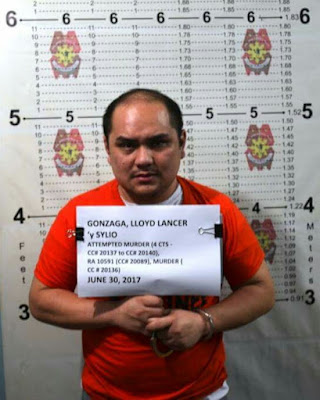 A couple of weeks ago, I was pondering having to write a post about how no one involved in the murder of my sister-in-law Mia had been arrested. But then on June 30, we received the news that Lloyd Lancer Gonzaga (see mug shot above) had been arrested in Davao City in the island of Mindanao.  Last week, Mr. Gonzaga had been transferred back to Tagbilaran City in Bohol.
As I recounted in my previous post, Gonzaga was the one who instigated, as well as participated in, the shooting death of Mia while she was driving her children home.  While the other gunman, as well as the two men who drove the motor bikes that transported them, are still at large, Gonzaga was the one responsible for engineering the terrible crime.
Of course, the arrest of Gonzaga is merely the first step in the process of achieving justice for Mia.  He still needs to be tried and sentenced for his crimes.  I don't know how long this will take, though I know that I must be patient and accept that it could take months.  What is important is that the criminal justice system in the Philippines must be shown to work and that Gonzaga receive the maximum penalty allowable under law, which I assume is life in prison, as the Philippines does not have the death penalty.
I will provide further updates as they become known to me, as this is obviously a deeply personal matter for me.
﻿
Posted by Tommykey at 10:52 PM 0 comments