Adam and Steve to Get Married in New York 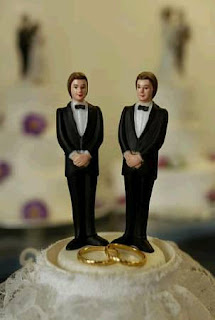 Tonight, the New York State Senate passed the marriage equality bill.  With that achieved, all that remains is for Governor Andrew Cuomo to sign the bill into law.  This is a big victory for same-sex couples, because (1) marriage equality was achieved by a majority vote in the legislature, and (2) New York is one of the more populous states in the country with a larger gay population that can benefit from the law.  A high school classmate of mine who is gay and has been in a longtime relationship with another man expressed on Facebook a short while ago how happy he was that the possibility of marriage for him and his partner had become real.

I believe 30 years from now, when marriage equality will likely have been achieved nationwide, a lot of people will probably wonder why some opponents of same-sex marriage were so hysterical over the prospect of two people of the same gender being able to tie the knot.  Our civilization will not have been destroyed because Adam was able to marry Steve instead of Eve.

However, we also need to acknowledge that the picture will not be a completely rosy one.  Gay marriage will inevitably lead to gay divorce.  In some instances, child custody issues will arise, either because of adoption or because one of the partners in the marriage had a biological child from a previous heterosexual marriage or relationship.   As with some heterosexual marriages, some same-sex marriages will be fraudulent.  For example, gays who are American citizens will be able to bring in immigrant spouses so that the latter can obtain permanent residency and citizenship in the United States.  It shouldn't come as a surprise that some of these marriages will be merely marriages of convenience to enable an immigrant to acquire American citizenship.  That being said, these are no more reasons for barring same-sex marriage than they are for banning heterosexual marriage.  It is simply a recognition that equality before the law is meant to provide equality of opportunity without guaranteeing perfect outcomes.
Posted by Tommykey at 11:48 PM

Our civilization will not have been destroyed because Adam was able to marry Steve instead of Eve.

Indeed, gay marriage has been legal in several states and foreign countries for several years now, with no discernible effect except gay people getting married.

When gay marriage is legal nationwide (which I expect will take a lot less than 30 years), the fundies will be trying to ban something else, like marrying artificial intelligences. Their attitude toward progress echoes Rufus T. Firefly: "Whatever it is, I'm against it!"

I saw one attorney interviewed on the news. He said that there are over 750 laws in NY having to do with marriage. Since gay "marriage" is now legal, NO new laws need to be enacted to support it. I hadn't thought of that.