The Repeal of DADT 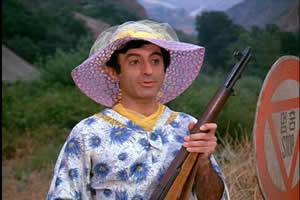 On September 20, 2011, the United States military officially ended its policy of Don't Ask Don't Tell, aka DADT.  Secretary of Defense Leon Pannetta hailed the change, declaring "Thanks to this change, we move closer to achieving the goal that is at the foundation of American values -- equality and dignity for all.”
Needless to say, not everyone in the United States shared Pannetta's positive viewpoint.
The "Family" Research Council  (yes, the quotes are deliberate on my part) decried the policy change, concluding that President Obama "is more interested in appeasing sexual revolutionaries than in fighting America's enemies." Yes, the same President Obama who ordered the raid on the compound in Pakistan that ended the life of Osama bin Laden and who has overseen a policy of increased drone strikes in the mountains of the Pakistan-Afghanistan border that has killed so many Taliban is really not interested in fighting America's enemies.  Right.
Hopeless Republican presidential candidate Rick Santorum, in a recent Republican candidates debate that saw several audience members boo a gay soldier serving in Iraq, stated in response to the soldier's question that he would reinstate DADT if elected.  Santorum affirmed his belief that "Any type of sexual activity has no place in the military."
I wonder if Ricky boy ever read Mark Bowden's Black Hawk Down, which is about the raid carried out in Mogadishu, Somalia that saw two Black Hawk helicopters shot down and the US Army Rangers and members of Delta Force who found themselves surrounded and under fire for the better part of a day.  Bowden describes what life was like for the servicemen stationed in Somalia prior to the raid.
"The worst thing about hangar life, of course, was the lack of women...There was plenty of porn around, of course, and many of the Rangers were humorously casual about masturbation.  Most were discreet about it, but some had adopted a sort of crude defiance, standing up next to their cot to announce 'I'm going to the port-o-pot to fuckin' jack off!'  Specialist John Collett, a SAW gunner with absolutely no shame about such matters...claimed to have gotten a 'harness jack,' that is, to have masturbated hanging from a parachute harness."
Given the Catholic Church's position on masturbation, and Ricky being a good Catholic boy and all, I'm sure he would be mortified to know that some of our elite soldiers engaged in a form of sexual activity in a combat area.  Maybe the mission in Somalia went awry because God was punishing our soldiers for jacking off.
My favorite over-the-top wailing about the repeal of DADT comes from Washington state's resident Christian wingnut Ron Boehme, who I've mentioned before in this blog here and here.
Boehme rants:
"December 18, 2010 was a sad day for the cause of liberty. The United States Senate voted 65-31 to rescind the seventeen-year "Don't Ask Don't Tell" (DADT) policy in the American forces. On the heels of a 250-175 vote in the House of Representatives, largely along party lines, homosexuality is now "free" to openly flourish in the barracks or foxhole.

By this infamous vote, The United States government now openly condones and encourages homosexual behavior among our fighting men and women. The last bastion of discipline and moral order in the United States has been breached, not by an invading army, but by a destructive Lame Duck Congress."

He adds, with typical hyperbole, "This is a sad day for real liberty--which is freedom from sin." (Italics in the original).

The reason why I used the picture of Corporal Klinger from M*A*S*H at the top of this post is because when it comes to gays serving in the military, I think that is exactly what the homophobe opponents of DADT repeal picture when they claim that homosexuality will "flourish in the barracks."  It seems beyond their realm of comprehension that a gay man can serve in the military without walking around with a boner and grabbing the asses of the manly heterosexual and devout Christian men in his barracks.

Boehme, Santorum and their ilk are full of shit because it was not what gay soldiers were doing in the barracks or in combat or other service that caused them to be discharged from the military but because of what they did or were thought to do in their private life.

And it is disingenous of Boehme to invoke "freedom from sin" in opposing the repeal of DADT, because the last time I checked, one of the tenets of Christianity is that everyone is a sinner.  That includes every heterosexual man or woman serving in the military.  Yes, for some reason, sexual orientation, not behavior, mind you, but orientation, is the one sin that should disqualify a person from serving in the United States armed forces, regardless of that person's talents or abilities.

While the supposedly Gawd fearin' people like Santorum and Boehme are all hot and bothered about the sin of gayness being inserted into the military, there is some actual sinning going on being perpetrated by heterosexuals in the military.

While searching the Department of Defense web site for the press release I linked to above about the repeal of DADT, I came across this interesting press release about addressing domestic violence in the military.

The restricted reporting option has been in place since 2006, and is intended to offer domestic violence victims a chance to seek help despite fears they might feel based on their situation, Robertson said.

Often in such cases, Robertson said, abuse has escalated over time, and victims –- especially military spouses -- may fear loss of finances, housing and family security. Restricted reporting offers them a safe avenue to help, she added.

This article from the July/August 2005 issue of Mother Jones shines a spotlight on the military's domestic violence problem up to that time.

The article begins with the story of John Corcoran, who "arrived at his wife’s house and went after 30-year-old Michele with a gun, firing at her as she fled to a neighbor’s. (She was wounded but survived.) He shot and wounded another Fort Bragg soldier who was in the house and then shot and killed himself—all while his seven-month-old daughter lay in another room."

"He joins a band of brothers. Corcoran’s is the 10th fatality in a slew of domestic violence homicides involving Fort Bragg soldiers since 2002; in one six-week spree four Army wives were murdered by their husbands or ex-husbands. Including nonfatal incidents, there were 832 victims of domestic violence between 2002 and 2004 at Fort Bragg alone, according to Army figures."

Maybe Boehme doesn't consider domestic violence to be a sin, because the wife is supposed to submit to the husband, right?  How does he feel about sexual assault then?  From the CBS article in the foregoing link:

"Wendy’s experience is not unusual. Since 2002, the Miles Foundation, a private non-profit that tracks sexual assault within the armed forces, has received nearly 1,200 confidential reports of sexual assaults in the Central Command Area of Responsibility, which includes Iraq and Afghanistan. Those reports have increased as much as 30 percent a year.

Part of the problem for the increase, critics say, is the quality of today's recruit.

The military is increasingly issuing something called "moral waivers," so they can enlist military personnel with felony convictions for crimes like rape and sexual assault.

“We don’t enlist convicted rapists in the armed forces of the United States,” said Michael Dominguez, the principal under secretary of defense for personnel and readiness. “If there’s a consensus 'that kid needs a second chance, I think he’s got it in him to be a solider,’ then they’ll let him into the armed forces.”

In fact, CBS News has learned that both the Army and Marine Corps did issue a number of "moral waivers" to enlistees with felony convictions for rape and sexual assault - something not acknowledged in a follow-up letter from Dominguez."

The Religious Right likes to bellow about the immorality of allowing gays to serve in the military, while being eerily quiet about the problems of domestic violence, sexual harrassment of female service members and the issuing of "moral waivers" to enlistees and recruits.  It seems plainly apparent that for these Christian culture warriors, some sins are more equal than others.
Posted by Tommykey at 10:45 PM

None of these pearl-clutchers ever address the fact that plenty of other advanced countries have allowed gays to openly serve in their military forces for years, without turning into Sodom and Gomorrah. Just as with gay marriage, a look at the experience of other societies debunks their absurd panic.

You have to remember Infidel. We're a nation under God. Thefore the forces of Satan act more strongly against us! Satan is making gay marriage and gay military service seem uncontroversial in other countries in order to lull us into a false sense of security.