Hey Fox News! This Is What A War On Christmas Looks Like! 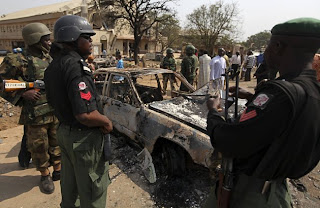 The way right wingers describe it, Christmas is on the verge of becoming declared illegal in the United States and inadvertently saying "Merry Christmas" instead of "Happy Holidays" to a Jew or a Wiccan will get you thrown in prison.

Maybe it is precisely because they are not being persecuted that the Faux News crowd has to sensationalize relatively trivial incidents and blow it up into an all out assault on the celebration of Christmas.  Contrast that to what happened in Nigeria, as shown in the picture above, where Muslim militants bombed three churches and killed at least 7 people.

I would say to Fox News personalities like Sean Hannity and Bill O'Reilly that they should be ashamed of themselves, but they do not appear capable of feeling ashamed.
Posted by Tommykey at 7:22 PM