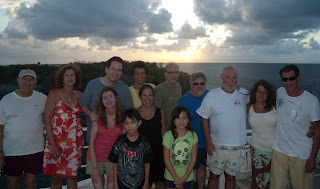 Yeah, I know.  The trip was nearly six months ago and I'm still writing about it.

If you are looking to go scuba diving on a live aboard, you can't go wrong with the Aqua Cat.  For myself, it was a different experience than most divers, as I took my two kids with me, aged 10 and 8.  Unlike my Belize trip in 2009, this wasn't going to be a complete escape from the daily humdrum of life.

Still, I am glad that I took my son and daughter along for the trip.  It was a chance for them to experience something totally different from what they had done before.  For my son in particular, it proved to be an opportunity to push his boundaries and do things that I never thought he was capable of.   My son is normally a timid child who is hesitant to take chances or do anything outside of his comfort zone.   But on this trip, as I believe I wrote in an earlier post, he took me totally by surprise.  Not only did he take to snorkelling, getting the hang of it quickly in a rather calm lagoon, he took the bold step of going into waters filled with Caribbean Reef sharks. 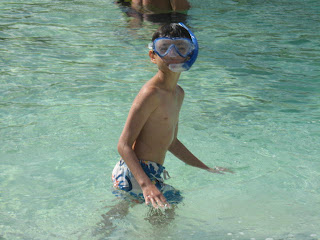 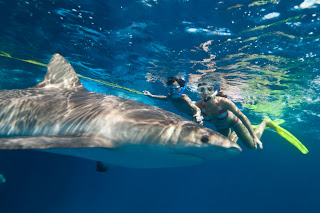 Andrew might even go so far as trying his hand at scuba diving when we go on our trip to the Caymans in July.

Where my kids are concerned, I have to give a special shout out to Aqua Cat crew members Nathan and Stacey.  Nathan in particular spent a lot of time with my kids and keeping them occupied with fun activities.  My kids each got to captain two of four teams in a series of contests that required participants to engage in some silly and sometimes embarrasing tasks.  My daugher's team The Goofballs ended up winning, and in the video below Kellyanne gets her prize.


Stacey was the crew member kind enough to take my son snorkelling while I was away on my diving misadventure.  She is the one pictured in the photo above with the yellow finds swimming alongside Andrew.  Stacey also was in the awkward position of being the lone female in a crew of ten.  I hope that future voyages had some better gender ratios for her.

For myself, it was a wonderful trip.  Our group included a lot of friends I made from the Belize trip and some great new people.  When I made the decision to go to Belize in 2009 and take up scuba diving, it just opened up a whole new world for me and changed my life for the better in so many ways.  When I hit middle age, I had a yearning to do something adventurous in my life, and scuba diving really fit the bill.
Posted by Tommykey at 9:30 PM

Email ThisBlogThis!Share to TwitterShare to FacebookShare to Pinterest
Labels: Bahamas