The Philippines/Taiwan Trip - September 2, 2011 - A Hotbed of Pagan Idolatry

The second day of our stay in Taipei was going to take us to the southwest section of the city.

Our first stop, the famous Longshan Temple.  Given how far it was from our hotel, I decided to play it conservative and take a taxi.

While the Longshan Temple is one of the more well known tourist destinations in Taipei, the first thing one must be mindful of is that it is an actual functioning temple where people go to pray.

According to my Rough Guide to Taiwan, the Longshan Temple is "principally a Buddhist temple dedicated to the boddhisatva Guanyin, but there are more than a hundred deities worshipped here, mostly from the Taoist pantheon."

That probably explains why there were clusters of people praying in different sections of the temple.

I neglected to take a picture of the outside entrance of the temple.

After you go through the front entrance, you find yourself in an outer courtyard that separates you from the main action (if you can call prayer action) inside the temple. 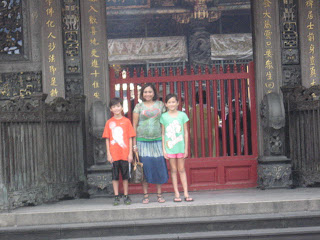 The outer courtyard was a pretty, peaceful place itself.  In one end of the courtyard there was this small waterfall. 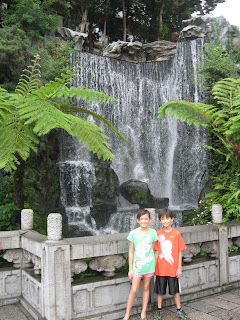 At the opposite end, behind us, was a fish pond. 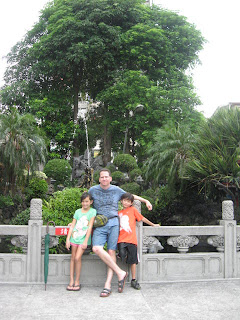 One thing that one cannot help but notice about the architecture of the temple was that it contained lots of dragon motifs. 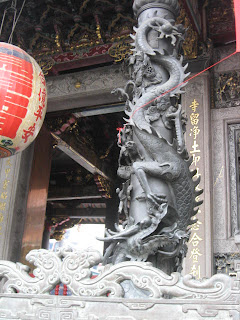 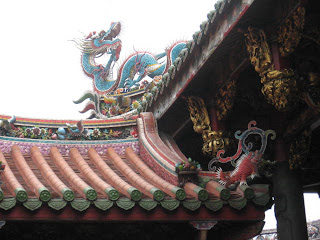 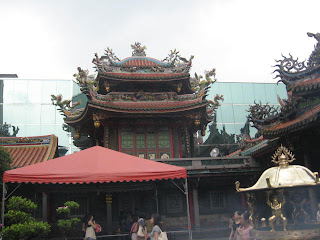 The temple was also filled with lots of local heathens who are surely destined to burn in hell in the afterlife because they don't worship the Baby Jesus as their Lord and Savior. 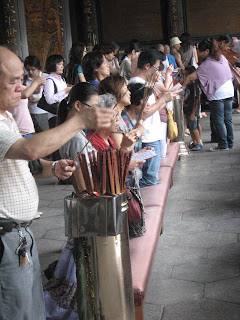 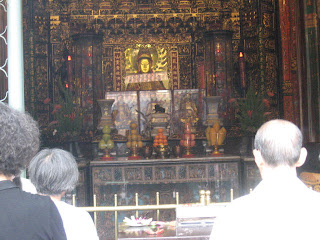 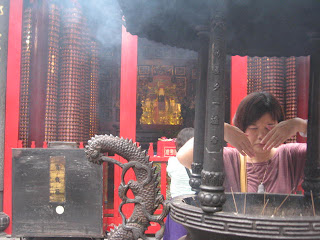 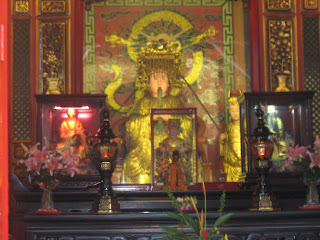 This last photo above is interesting, because it appears to be a convenient way of economizing on the placing of the various deities.  There's the big one in the backgroumd, and the three smaller ones encased in glass in the foreground.

In all seriousness though, the Longshan Temple was a nice, tranquil place to visit where for a little while you can almost forget you are in the heart of a bustling city filled with millions of people.
Posted by Tommykey at 9:44 PM

It's always good to repsect others and their beliefs!!!

Do not put hurtful comments that people not believing in YOUR god will be 'destined to burn in hell'...
That's so uncalled for....

Noone knows for sure what happens after death or in future! It's all in our personal faith and beliefs!

All i know is there is someone here who doesn't practise religious tolerance and nor has shown respect for OTHERS!!!!! Why tour places if you are gonna make such unwarranted comments!!??

Anonymous, I am an atheist. The line about them going to hell for not being Christians was meant in jest and is the opposite of what I actually believe. You need to lighten up a little.