The Philippines/Taiwan Trip - September 2, 2011 - Back To The Far Eastern Plaza Hotel

After we had our lunch at Modern Toilet, I was hoping we could visit the 2-28 Peace Park, which is located a few blocks east of the Ximen MRT station.  If memory serves though, the wife and kids were a bit tired and I think that was when one of my son's sneakers started to come apart.  So, we rode the MRT back to the Xinyi district and walked back to our hotel.

It was a hot afternoon, and it seemed the right time for the wife and kids to try out the Far Eastern Plaza's rooftop pool. 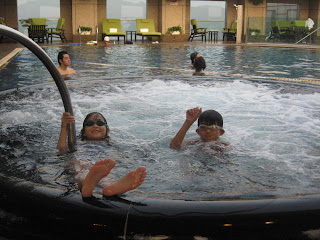 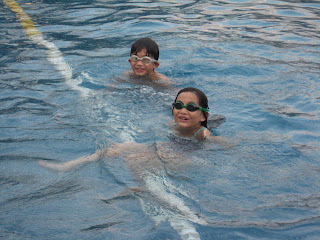 For reasons I don't recall, I didn't end up swimming in the pool and wasn't there for most of the time.  I might have been checking my e-mails on one of the computers that were made available to hotel guests.  Actually, now that I think about it, I did check my e-mail to make sure that our plans were on for later in the evening with two very special guests (see below). 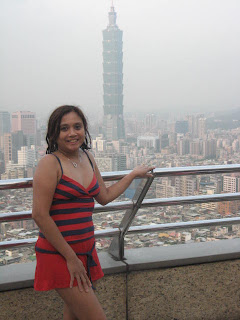 Of course, our trip wouldn't be complete without a picture of my wife in a swim suit with Taipei 101 in the background.

After the pool, we walked back to the Linjiang Night Market that we had visited the night before to buy new sneakers for my son to replace the ones he had worn out.  We also ate noodles from the same noodle stand and then headed back to our hotel so that the wife and I would have time to shower and get ready for a special meeting.

For those of you who have read through all of my posts on Taipei so far, you'll know that I often referenced Nino's blog My Kafkaesque Life for ideas on where to go in Taipei as well as other helpful information about the city.  I thought it would be a nice idea to invite him and his wife Lily to meet up with us at the Far Eastern Plaza's Marco Polo Lounge.   To my pleasant surprise, he accepted our offer.

While the bulk of my blogging is atheist related, for all the years I have been blogging, the only atheist bloggers I recall meeting in person were Adam Lee of Daylight Atheism and Shalini Sehkar (whatever happened to her anyway?) at a Center for Inquiry event in New York City a few years ago.  So, it was pretty cool to get to meet a blogger in Taipei whose blog was such a valuable resource for me.

My wife and I headed up to the Marco Polo Lounge around 9-ish local time to meet them.  I recall that the door to get into the lounge was a hidden door that the hostess outside pushed open for us, otherwise we might not have noticed it.  It sort of felt like walking into the lair of some James Bond villain.  The lounge was rather crowded and we couldn't get a table by the window for a view of Taipei at night like I had hoped, but you can't get everything you want, right?

A few minutes after my wife and I got settled in, I saw Nino and Lily come in.  I actually recognized her better, because I saw a few pictures of her on Nino's blog, whereas the few pictures of him on his blog generally show him from a distance or at an angle, probably because he is the one who takes most of the pictures.

We had some rather pleasant conversation for about an hour and half or so.  Since Nino is from Slovenia, I told him about my grandmother who was Slovenian and came from a town on the Austro-Slovenian border and joked that we might be distantly related.  Nino and his wife talked a bit about their life and jobs in Taipei.  They seemed to get a kick out of my caricatures of ignorant American voters who believe that Barack Obama is a secret Muslim Kenyan commie atheist who wants to impose sharia law on the United States.

One of the lounge waiters was kind enough to take a group photo of us to memorialize the occasion. 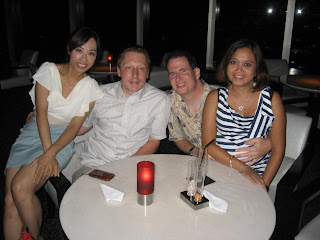 I was glad they were able to meet up with us.  Besides having the opportunity to meet with a fellow blogger, it was also a nice little break from the kids for the wife and I and to hang out with some grown ups for a change!

And then it was off to bed with one more full day in Taipei ahead of us.

It was my pleasure to drop by here and your experienced is really great. I want to travel also in Taiwan and check-in in Far Eastern Plaza Hotel. Thanks.