The Return of Katrina and Gilbert

Last November, in my post On Becoming A Cat Person, two of the cats I wrote about who had become a part of my life were Katrina and Gilbert.

Katrina was a frequent guest in our home who occasionally escaped, only to be recaptured after a few days, weeks or months.  After her last escape in May of 2020, she went her longest period of time outdoors.  She never left and basically lived on and under our backyard deck and coming to our patio door when she wanted to be fed.  With winter approaching in December, I decided to try and recapture her again.  I used the tried and true method to entice her into the house with food and then close the patio screen door, but she was wary of this and would bolt out of the house at the slightest suspicion that anything was afoot.  I decided to play the long game with her and let her come in the house night at night without making any attempt to shut her in so that she might let her guard down.  Then one night in mid-December, even with me standing right by the back door, Katrina strode into the dining room.  Amazed at my luck, I slid the patio door shut and just like that she was back in the house.  It was kind of funny, as she looked up in shock as she realized what happened to her.

One change I made after her previous stays with us was to block her access behind the love seat in the living room, as she would spend the majority of her day hiding behind or underneath it.  While Katrina is still very shy and won't let us pet her, if I put my hand in front of her, sometimes she will lean forward to sniff it and then I will touch her on the nose.  In some ways she is a little less shy than she was before.  Now she follows Snickers into the kitchen when he comes in to pester me to give him treats.  She is also more likely to nap out in the open and often seems unphased by our presence.  Sadly, she still has her frequent bouts of asthma attacks, and because she won't let me get close to her, I can't give her the medicine that I would give to Snickers when he would have his semi-annual respiratory issues.  Otherwise she seems to have settled back in nicely and often plays around with Snickers, sometimes even initiating contact with him and getting him to lick her fur. 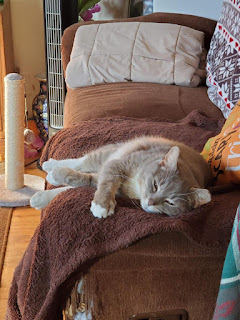 The most stunning development though has been the unexpected return of a once daily visitor to our deck.  Around 5 am this past Thursday the 17th, I was excitedly awoken by my wife, who cried out "Honey, Gilbert is here!"
The shaggy Maine Coon had not been seen by us since May of 2019, nearly two years.  While a part of me had held out hope over that time that Gilbert was out there somewhere and might still come back some day, I had pretty much written him off as gone for good.  But when I rolled out of bed and shuffled over to the back door that morning last week, there he was looking up at me. 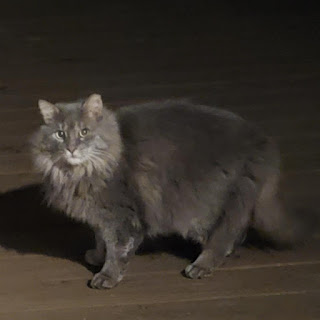 I went out the front door with a bag of cat food and around the side of the house to the back to feed him as I had done so many times before.  As was his pattern of behavior in the past, he would retreat a few feet and then approach after I had put out the food.  He alternated between hissing if I got too close for comfort and then switching to a soft meow that belied his large stature.  One thing different I noticed about him is that the top part of his left ear was clipped off, which told me that at some point during the past 22 months someone had captured him and had him neutered.
We wondered if Gilbert was just making a guest appearance or if he would be a regular visitor again.  Well, not only did he come back, he pretty much didn't leave.  While we don't see much of him during the day time (we believe he is spending that time under our deck), Gilbert stays on our deck all night.  Not only that, he spends much of that time sitting right at our patio door staring in at us.  It's hard to tell what he wants.  I have put Snickers and Katrina away a few times and opened the door to give Gilbert the opportunity to come in, but when he does, it is tentative and fleeting, and he retreats back out to the deck usually after a few minutes.  I am not sure if he wants to live indoors with us but is just too shy to take that step, or if he is interested in Snickers and/or Katrina.  One change I have noticed in his behavior is that he will sometimes rub himself against the patio screen door and then lay on his back and roll around in a playful manner.  Assuming he stays, I might try to give him the time to become more comfortable with us and then see if I can entice him in and see if we can make him a house cat.  The wildcard in the equation is how Snickers and he will get a long, as having two male cats in the house might lead to territorial aggression between the two.  Though Gilbert is clearly a survivor, he is probably getting up there in years.  I don't know his age, but I would estimate he has to be at least 7 years old, as he was already fully grown when we first spotted him in the summer of 2016.
Another development is that the other Maine Coon who has been a regular visitor in the last couple of years, Oscar, has practically vanished since Gilbert reappeared.  In the past week Oscar showed up and shared the deck with Gilbert only once.  I did not observe any hostility between them and they kept their distance from each other.   Then again, around the time Gilbert stopped showing up in May of 2019, he was almost immediately replaced by Oscar.  That suggests there is some kind of territorial dispute going on between them.  It would not surprise me though if Oscar is still close by in the neighborhood and that we will see him again someday in the near future.