Yes, to be honest, it turns out that John Edward really is not the biggest douche on Long Island. At most, he comes in third place.

As a Long Islander, I have been remiss in even so much as mentioning the most notorious case on Long Island in the past year. And that has been the case of Mahender and Varsha Sabhnani of Muttontown.

To my readers who may be unfamiliar with the story, the Sabhnanis were accused of forcing their two Indonesian maids to live like slaves in their Muttontown mansion and subjecting them to torture and abuse. The plight of the maids was revealed when one of them fled the house early one morning this past May and was noticed by a Dunkin Donuts worker on Jericho Turnpike. This New York Post article provides a good summary of the events leading up to the arrest of the Sabhnanis. A blog called IndieQuill has a post on the case with some pictures, including one showing some nasty injury that was inflicted on one of the maids.

The wife, Varsha, featured in the enlarged picture below, was very quickly dubbed Cruella Deville. 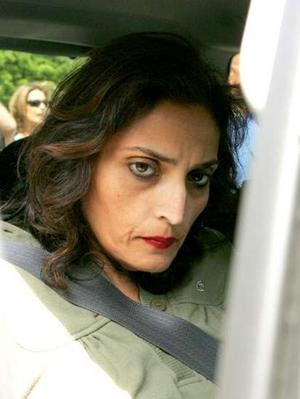 Yesterday, a jury found the Sabhnanis guily on 12 counts. They could each face up to 40 years in prison. Furthermore, as I have just read on Newsday, the jury also voted in favor of forfeiting the Sabhnani's Muttontown mansion, out of which they ran their perfume business, because the house was used in the commission of their crimes. Hmmmm...maybe this will be my big chance to trade up to a larger house.

Newsday also has an article on what the two former maids, Enung and Samirah, are up to now. Newsday quotes a source that "They are temporarily being financially supported by Catholic Charities, which has the contract from the Justice Department to assist victims of human trafficking, and being cared for by an order of nuns in Amityville."

As an atheist and former Catholic, regular readers of this blog know I love to criticize religious nuttiness. However, religious groups and individuals also deserve kudos for the good works that they perform. Catholic Charities is one of those groups. While the Catholic Church is rightly criticized for its stance on birth control and for its handling of its pedophile priest problem, among other things, the Church also has a strong social justice tradition, and Catholic Charities is representative of that noble impulse. Here is a link to the web site for Catholic Charities of Long Island if you would like to find out more about the services they offer and maybe even send them a donation this holiday season.

The subject of human trafficking, whether it be forced labor such as the Indonesian maids endured, or trafficking in sex, is a topic I have been meaning to focus on with this blog, but which time constraints have prevented me from thus far. It is a problem that knows no borders, and, as the Sabhnani case reveals, it is a problem that lurks even in our own neighborhoods behind closed doors.

Here is a link to the U.S. State Department's 2007 report on human trafficking. I have only read a few pages of it thus far, but hope to get to read more of it in the coming days ahead.