What's the Difference Between Religious Filipinos and Crazy People? 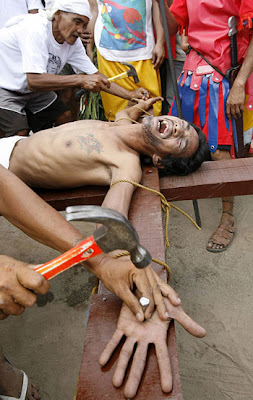 Yes, it's Good Friday, and that means it's the time of year in that most Catholic country of the Philippines when a few dozen of the deeply devout and deluded reenact the crucifixion of Jesus Christ by literally having themselves nailed to a cross. However, they must be doing it wrong, because the picture above shows the nail being driven through the man's hand rather than by the wrist.
But interviews with some of the participants in this ghastly ritual suggests that there is more to it than mere religious devotion.

"I hope the Lord will grant my wish to make me win big in 'jueteng' this year," Alex Laranang, a 55-year-old food vendor who said he can't read or write, told Reuters before two 5-inch nails were driven into his hands on a scorching hot day.

Laranang, a father of five, said he had won 3 thousand pesos ($70) twice in the five years he had himself crucified on a cross.

Okay, so Mr. Laranang has had a 40% success rate in winning the lottery in the past five years. However, we do not have any statistics for the success rate of his non-crucified (is that even a word?) friends and neighbors who also may have won the lottery in the last five years. And three thousand Philippine pesos? Shit, I have 1,820 pesos in my filing cabinet left over from my last trip to the Philippines. I would have been happy to have given it to Mr. Laranang if it would have kept him from having himself nailed to a cross.

But maybe there's more to this crucifixion thing than winning the lottery. Health benefits, perhaps?

Roli Pantoja, a construction worker, said he felt much better after getting down from a wooden cross. This was his sixth crucifixion.

"I feel very fresh, like a new-born baby. I can't feel any pain," he said.

Damn! But if it feels so good, why only do it once a year? How about once a week? That way Mr. Pantoja can feel like a new-born baby all the time.

The Catholic Church in the Philippines officially condemns these crucifixion reenactments. After all, wasn't the whole point of the Crucifixion was that Jesus supposedly did it for us? I thought the message of Christianity was to take up the cross, not to be nailed to one.

Then again, the Catholic Church in the Philippines has more pressing issues, like opposing the Reproductive Health Bill.

A Catholic priest has set off a rumpus when he urged churchgoers during his homily to leave if they were supporters of the controversial reproductive health (RH) bill.

ABS-CBN in a report on its website quoted the priest as saying in a mix of Filipino and English: “If there is anyone in the Mass here who are pro-RH bill…please, go out. It’s useless.”

I would be willing to pet my 1,820 pesos that at least some of the congregants who were in attendance at that mass were having adulterous affairs or engaged in other activities considered by the Church to be sinful. But the priest didn't say to his congregation, "If you are engaging in acts of adultery, thievery or corruption, please go out." No, instead he attacks those who support a piece of legislation which "promotes information on and access to both natural and modern family planning methods, which are medically safe and legally permissible."

Which leads me to my next question, why does an institution controlled by celibate men get to have so much say over matters involving the sex lives of other people?
Posted by Tommykey at 11:07 AM

...Mr. Laranang has had a 40% success rate in winning the lottery in the past five years.

Well, who woulda thunk? I didn't know Jesus was so partial to gamblers. Maybe Pascal was on to something after all. Still, crucifixion is a painful price to pay for a winning lottery ticket.

Still, crucifixion is a painful price to pay for a winning lottery ticket.

And it's not like he won the Powerball either. Heck, I might get myself nailed to a cross for $50 million. But I certainly wouldn't do it for what I spend on gas in a month.

They don't have "control." Everyone has free will. You can believe what you want to. I mean, of course the Catholic Church has an agenda. Doesn't everyone know that? But that doesn't mean you have to follow it. Even the Catholic Church would say that ultimately, people have a choice to believe what they wish, although the Church would also say there are consequences that flow from whatever choice you make. The Church also teaches that we can know Truth in the form of God, the creator. (This shouldn't be a surprise.) However, no one is doing any arm-twisting in this day and age. (Although it might look that way to you, I don't know.) As far as the Filipinos crucifying each other, well that's peculiar, for sure. But it's an example of the Church saying "Stop, that's crazy," and people doing it anyway.

"What's the Difference Between Religious Filipinos and Crazy People?"

Many crazy people are not Filipino. Aside from that, I can't think of any differences.