Revelling In His Own Douchebaggery 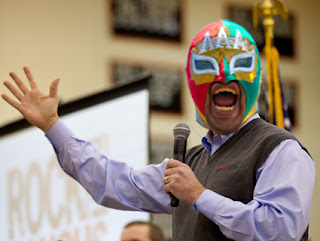 With the exception of Jon Huntsman, when I look at the batch of candidates campaigning to be the Republican presidential nominee, I see a collection of vile, meanspirited assholes.  For a while, I felt that Newt Gingrich was at the head of the pack in terms of prickery.  But with former Pennsylvania senator Rick Santorum's near win in the Iowa caucuses last week, he is finding himself more and more in the spotlight, propelling him ahead of Newt in the douchebag department.

Santorum's had quiet a few juicy nuggets lately to rile the masses.  His message to children with gay parents is that they would be better off with a father in prison.  He was booed by members of an audience when he declared that gays weren't entitled to marriage or military service.  And here's what he had to say when a woman complained about the cost of her prescription medication:

I had a woman the other day who came up and complained to me that she has to pay $200 a month for her prescriptions…I said, in other words, this $200 a month keeps you alive, she goes yes. I said, and you’re complaining that you’re paying $200 a month and it keeps you alive? What’s your cable bill? I mean, what’s your cell phone bill? Because she had a cell phone. And how can you say that you complain that you have $200 to keep you alive and that’s a problem? No, that’s a blessing!"

ThinkProgress has a collection of some of Ricky's outrageous statements here.

It almost seems as if Ricky gets off on pissing people off.  And then as I read more about him, I understood Rick Santorum perfectly.  He's the "bad guy" that you see in those professional wrestling matches on tv.  He's the one who taunts the crowd and gets them to boo him.

This excerpt from a recent article from The New York Times is rather telling:

People in both parties over the years have accused him of hotheaded name-calling, reliance on immature antics and attempts to reduce politics to steel-cage matches between people cast as heroes or heels.

“He would attack people in a smug way that was harder-edged and more insulting than was necessary, said Mark Salter, the former chief of staff to Senator John McCain, the Arizona Republican, adding that lawmakers in both parties shared this view. “He was a bully who was not a potent enough force to be a bully.”

Not surprisingly, Rick Santorum has a connection to professional wrestling, as "prior to getting involved in politics, Santorum worked at a law firm, where he once argued in court—successfully—that pro wrestling should be exempt from steroid regulations because it's staged (and therefore not a sport)."

From what I have read so far, Mitt Romney will likely win the New Hampshire primary by a comfortable margin, so Santorum will be looking to the more socially conservative South Carolina voters to give him a boost.  I suspect that Santorum knows he doesn't really have a chance to win the Republican nomination.  But he will stay in the race anyway because it will give him the chance to do what he loves the most, stand in front of a camera and an audience so he can rail against abortion and butt sex.

It can't be easy for an incumbent Senator to lose a re-election race by 18 points, but I'm beginning to understand how Santorum managed it.

But I agree that he has very little chance of getting the nomination. Not because of his bigotry, lunacy, arrogance, and callousness -- those things make him the ideal standard-bearer for the Republican party as it exists today. No, he'll implode when the fundie base realizes he's Catholic. That's a bit less Satanic in their eyes than being Mormon, but it's a small step up from there.

Looking for an explanation for his increased assholiness since the iowa win, we figured this: The GOP wants romney; Frothy got way more votes than they expected, so he's been instructed to say all this outrageous bullshit so people (well, republican) will drop his sorry ass and vote for romney instead.

"when I look at the batch of candidates campaigning to be the Republican presidential nominee, I see a collection of vile, mean spirited assholes."

What bothers me more is that a large portion of our populations seems to think this lineup is perfect acceptable!! I find that to be the more astonishing fact. My Father was a Republican but I cannot believe he would want to admit to that were he alive today.

I find it incredible that someone like Huntsman, who is probably closer to a Republican "statesman" like Mark Hatfield, can't even find the remotest level of traction in the GOP. It's not the fault of the party; this spectacle falls squarely on the morons the candidates feel compelled to appeal to.

My Father was a Republican but I cannot believe he would want to admit to that were he alive today.

Even I was once a Republican, but I guess it took the Bush administration with Republicans in control of both houses of Congress to really see them in action.