After the SYS Memorial, our next stop was Taipei's most famous landmark, Taipei 101.  For a brief time, it was the tallest building in the world, until it was supplanted by that tower in Dubai.  Now it's #2, unless someone else has built a bigger tower recently that I'm not aware of.

Not only is Taipei 101 the tallest building in Taiwan, it is way taller than any building in Taipei, which thankfully made it very easy for us to find our way there on foot.  While the four of us trudged towards the tower, it rained off and on, but fortunately it was a light rain.  The downside was that the rain and cloudy skies weren't good for taking photographs, like this picture below that I took of my wife and kids with Taipei 101 looming up behind them.  To get this shot, I got down on the pavement so that I could get my family and the tower in the same frame. 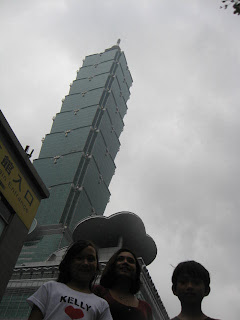 Before making our way up to the the observation level, we decided to take a load off our feet and get a bite to eat in Taipei 101's luxurious shopping mall.  I didn't take any pictures of it, but Nino has plenty of pictures here to give you an idea of the scale of it (it has multiple levels).

After that, we bought our tickets and went up the incredibly fast elevators (among the world's fastest) to the Indoor Observation Deck on the 89th Floor.  There is also an Outdoor Observatory on the 91st Floor, but due to the inclement weather, access to it was closed for the day when we got there.

The observatory offers commanding views of the city in all four directions.  On each side, to help you figure out what you are looking at, there are large interactive screens where you can touch the buildings or other sites displayed and it will tell you what it is. 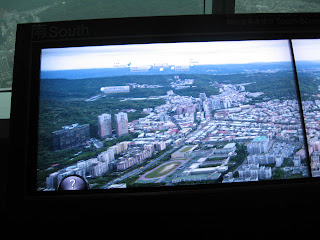 I was able to easily spot our hotel and take a photo of it as seen from Taipei 101. 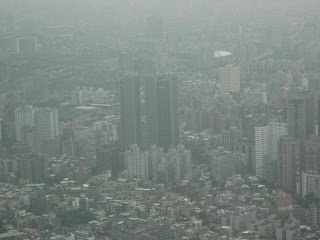 After taking in the impressive vistas, diminished as they were by the clouds and rain, the object of our attention turned to the ubiqituous Damper Babies.  The Damper Babies are basically these cute animated characters, sort of like Teletubbies, who explain in the short video below Taipei 101's damper, which is a structure that serves to stabilize the building during strong winds.

I didn't take any pictures of the damper, but below is one from the Wikipedia page for Taipei 101.  For some reason, it makes me think of the derelict ship in the movie Event Horizon. 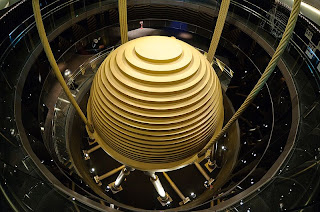 There were also plenty of Damper Baby statues for posing with in pictures, of which my wife and kids availed themselves. 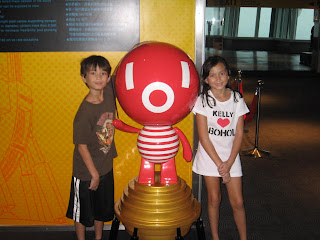 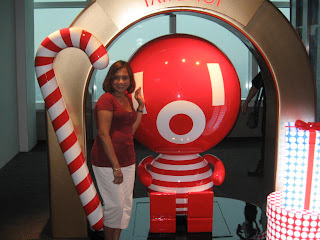 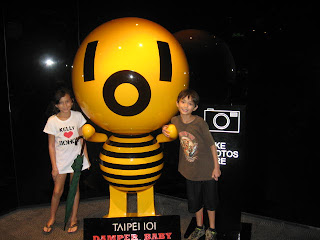 Other photo opportunities involved posing in front of pictures of Taipei 101, one of which my son used to good effect. 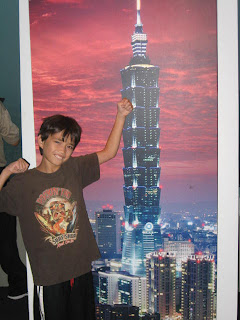 After we had our fill of the Observatory, we walked down a flight of stairs and encountered a shop displaying rather ornate and extremely expensive jade figurines.  I didn't take pictures, but if you want to check some of it out, this blog post at Oz Soap Box has several photos.  Just scroll down to the bottom.
We lingered awhile in the jade shop mainly because my wife wanted to look at and possibly buy something, but fortunately her good sense prevailed!  With that, we took the elevator back down and prepared for the trudge back to our hotel, though I managed to get one more shot of Taipei 101. 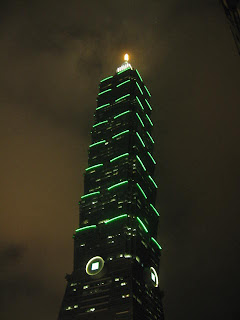 While I complained about how the cloudy skies made for crappy photos during the day, I have to say I like how this night shot turned out.  The clouds in this photo serve to create a smoky effect.
Our first day in Taipei was not finished yet, as we still had a night market to find on our way back to the hotel, but that can wait for another post.
Posted by Tommykey at 10:03 PM

Thanks for the link. I love the last photo, a very good shot. Looking forward to your next post :)