After recuperating at the Shangri-la in Mactan on August 30th, the next day we flew back to Hong Kong for a one night stay before heading on to the next leg of our trip, Taipei in Taiwan.  We arrived in Hong Kong around 3 P.M. local time, and after getting settled into our room at the Regal Airport Hotel, which is just a short walk from the airport itself, we took the Airport Express train into Central to meet a professional acquaintaince of mine at a noodle restaurant at the IFC Mall.

The next day we returned to the airport and caught our flight on EVA Air to Taipei.  If memory serves, our flight departed around 10:30 A.M. and the flight was about an hour and a half at most.

So, why were we going to Taipei, you might ask.  After our first visit to the Philippines in 2004, I thought that on each future trip we could take the opportunity to visit a different city in Asia for a few days after leaving the Philippines.  In 2007, Hong Kong was the obvious choice, because it was a stop over during the flights between the Philippines and New York.

For the 2011 trip, I considered several different possibilities.  One was to stay in Hong Kong again, but to use it as a launch pad for ferry trips to Macau and Guangzhou (Canton).  Another was to spend several days in Shanghai.  The other option was Taipei.  Part of the appeal for me to visit Taipei was the chance to support with my tourist dollars a democratic Chinese state rather than the authoritarian Peoples Republic of China.  I also felt it would be a friendlier place for Americans to visit than the mainland.  While I doubt that American tourists face overt hostility when visiting the PRC, I do know that whenever the occasional international dispute between the United States and the PRC occurs, outbursts of anti-American behavior does happen.  Taipei was also closer to Hong Kong than Shanghai, and I didn't think my 8 and 10 year old kids would enjoy day trips to Guangzhou and Macau, so Taipei it was.

Me being the meticulous travel planner I am, I consulted my copy of The Rough Guide to Taiwan to see what places we might like to visit as well as where we should stay.  I also did some research on the Internet, where I eventually came across a blog called My Kafkaesque Life by a Slovenian expat named Nino who is currently living in Taipei.  Nino's writes about virtually any place in Taipei you could think of seeing, and being an avid photographer, his posts contain lots of photographs that really bring the sights to life in a way that tour guide books do not.  If you ever plan to visit Taipei, or Taiwan in general, as he has visited other parts of the island, then Nino's blog is immensely helpful in helping you figure out where you want to go and what you can expect.  Just don't ask him to make any reservations or purchase any tickets for you!  ;-)

So, before our flight even touched down in Taoyuan International Airport, I already had planned exactly what we were going to do on our first day in Taipei.  Step one, of course, was to hook up with our ride to our hotel, the Shangri-la Far Eastern Plaza in Taipei's Xinyi district.  If memory serves, it is the tallest hotel in Taipei, and I specifically booked us a room with a view of Taipei 101, the second tallest building in the world.  Below is a picture of Taipei 101 as seen from our room.  As you can see, the sky was rather overcast and it rained off and on throughout the day. 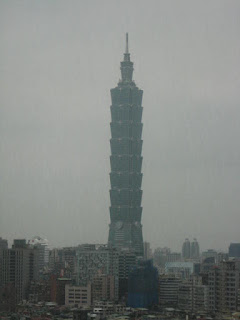 Once we were settled in our room, my daughter wasted no time in sprawling on the couch in one of the bath robes that were provided to us. 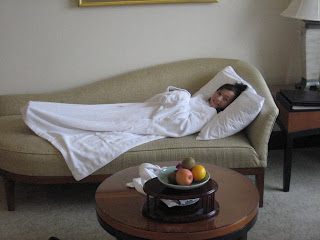 But there was little time to relax, as we had an ambitious itinerary planned for the day.  The first stop was the Sun Yat Sen Memorial Hall, where I looked forward to seeing the changing of the guard, which is performed at the top of every hour.  I was hoping we could catch the 3:00 P.M. performance.  After consulting with the door men at our hotel, we were able to find a bus stop where we caught the bus that would drop us off near the Memorial Hall.

Unfortunately, the changing of the guard ceremony was already underway when we got there.  I tried taking some pictures of the ceremony, but the room was not very well lit and only one shot came out even halfway decent. 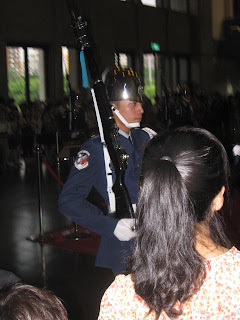 Silently overlooking the ceremony was a large statue of Sun Yat Sen himself seated in a chair, reminding me of the Lincoln Memorial in Washington, D.C.  Again, due to the lack of light, the picture did not come out well, with the famous Chinese nationalist largely bathed in shadow.  I used to have a photo editing program that allowed me to brighten dark pictures like this in order to make it more visible, but it seems to have been lost when the computer guy updated my computer to Windows 7. 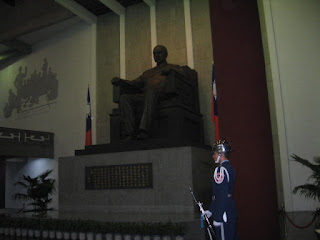 If you want to watch a video of the changing of the guard ceremony, I found the video below on Youtube:


Nino also has a post on his blog here about his visit to the SYS Memorial Center, and unlike me, he was fortunate to have lots of sunshine for his photos!

After the changing of the guard ceremony was over, we spent about an hour looking at some of the exhibits on display about the early 20th century history of China, including the war with Japan in the 1930's, as well as lots of photographs of Sun Yat Sen and his family.  Needless to say, my kids were bored and with that, it was time to move on to the next destination of the day, Taipei 101.
Posted by Tommykey at 11:09 PM

Sounds like you had a wonderful time! Good to hear!

Awesome post! I'm glad you found my blog useful, thanks for the compliments, I feel honored to be mentioned. I'm glad you had a very nice experience in Taiwan. I'm looking forward to your upcoming posts :)

Someday, I hope to travel the world.

@ Expat CPA. Yes, had a great time, apart from that day where I puked and diarrhiead my guts out.

@ MKL. Yes, I can't say enough how helpful your blog was. Also reminds me I forgot to link to your post about your visit to the Sun Yat Sen Memorial. I see you were fortunate to have sunshine when you went!