The Chosen People of the Supreme Being Test - Chapter 2: A Whole Lotta Smitin' Goin' On

In Chapter 1 of this series, we looked at how the God of the Bible, whom many today believe is the real, true, and all powerful and all knowing creator of the universe, gave his chosen people a stretch of land in the eastern Mediterranean that was poorly suited for sustaining a large population safe from foreign invasion. I compared the land of Canaan to that of Egypt, which was blessed with the fertile Nile River valley that could sustain a large population and had deserts along the frontiers that served as buffers against foreign invaders.

In summary, I concluded that if an all powerful universal deity had indeed selected a particular group of people to be his chosen people, it would be reasonable to expect that this deity would assign his chosen people territory that offered them an advantage over their neighbors. Since the land of Egypt was much more fertile and hospitable than the land of Canaan, the God of the Bible is either lousy at geography or he does not exist.

However, the geographic disadvantage of living in Canaan need not have been a disadvantage if the Israelites were militarily stronger than their neighbors. After all, if a confederation of tribes are supposed to be the chosen people of the most powerful being in existence, it would be reasonable to believe that they should be never be defeated in battle.

Indeed, the book of Joshua speaks of Joshua and the Israelites defeating this king and that king and destroying this city and that city. The text clearly tries to give the reader the impression that the tribes of Israel crossed the River Jordan, and with the Creator of the Universe on their side, were an irresistible juggernaut sweeping away all before them. But as with any piece of laudatory propaganda, the book of Joshua goes into great details about the victories allegedly won by the Israelites while being strangely vague about their defeats. For instance, Joshua 15:63 mentions almost as an aside that "Judah could not dislodge the Jebusites, who were living in Jerusalem; to this day the Jebusites live there with the people of Judah." Further on, in Judges 1:19, we are told that though the "Lord was with the men of Judah...they were unable to drive the people from the plains, because they had iron chariots."

Next, we leap ahead in history to the time of King David, the second king of Israel, whom we are to believe established an "empire" that extended all the way to the Euphrates River. Chapter 8 of Second Samuel is a litany of David's victories over the Philistines, the Moabites, the Arameans and the Edomites. He even manages to defeat those pesky Jebusites (2 Samuel 4:6-7) who frustrated the men of Judah and Benjamin to establish his capital at Jerusalem. Various maps differ in their representation of the size of the territory ruled by David, but by far the most exaggerated I found was this: 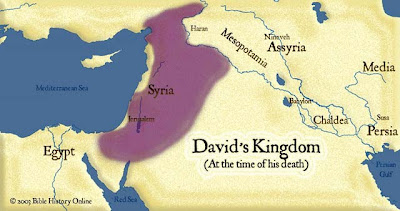 Even though I have been an atheist for approximately 15 years, I had taken it for granted that Israel was a mighty kingdom under King David. It was therefore a surprise to me when I began to read that there was virtually no archeological evidence to support a Davidic superkingdom that stretched from the Sinai to the Euphrates. The Tel Dan Stele makes reference to a "House of David", but the stele itself commemorates a victory by the Arameans over the Israelites. At best, it is evidence that there was an historical King David.

Regardless of how large or small Israel was under David and Solomon, what is not in dispute is that from the 9th century BCE onward there were two small kingdoms, Israel to the north with its capital at Samaria and Judah to the south with its capital at Jerusalem. In 722 BCE, the northern kingdom of Israel was conquered by the Assyrians, while the southern kingdom of Judah maintained a precarious independence for another century and a half when it was conquered by the Babylonian king Nebuchadnezzer.

But if we are to take the Bible literally, things were not suppose to turn out this way. The prophet Isaiah, who is supposed to have lived in the early 8th century in Judah around the time that Israel succumbed to Assyria, boasted in Isaiah 49:23 that "Kings will be your foster fathers, and their queens will be your nursing mothers. They will bow down before you with their faces to the ground; they will lick the dust at your feet." Perhaps Isaiah got his inspiration from this: 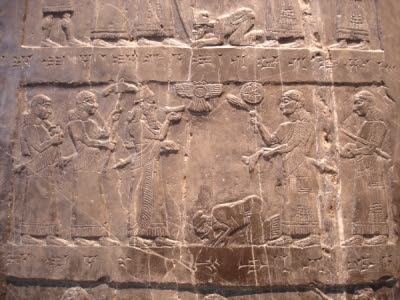 The obelisk above is a depiction of Jehu, king of Israel, kneeling before Shalmaneser III of Assyria. While Christians love to claim that Isaiah foretold the coming of Christ, the celebrated Biblical prophet was less successful with his prediction about a restored Israel compelling kings and queens to bow down and lick the dust before it. Instead, as mentioned above, the kingdom of Judah was conquered by the Babylonians in 586 BCE, ending the existence of an independent Jewish state for the next 400 years.

In the second century BCE, a Jewish state was reestablished by the Hasmoneans, but by the early 1st century BCE the Judean kingdom was reduced to the status of a Roman client state. After two violent but ultimately unsuccessful rebellions against Roman rule, the diaspora of the Jewish people out of the land of Israel accelerated and there would be no Jewish state until 1947. In Genesis 17:8, the god of the Bible tells Abraham, "The whole land of Canaan, where you are now an alien, I will give as an everlasting possession to you and your descendants after you." And yet for the last three thousand years, the land allegedly promised to the Israelites by their god was in their possession for less than one third of that time.

So, not only did God fail to provide his chosen people with the best choice of land for settlement, his evident sponsorship did not translate into winning wars against their powerful neighbors and preserving their existence as an independent state.

By no means should this be interpreted as denigrating the fighting capabilities of the Israelites. To borrow from Benjamin Netanyahu, they lived in a tough neighborhood. During the Bar Kochba Rebellion (132-135 CE), the Jews fought the Romans so ferociously that the Roman 22nd Legion disappeared from the listings of Roman military units.

But while the Israelites could inflict defeats on their smaller neighbors, such as the Edomites and the Moabites, no Israelite army could ever march on Thebes, Nineveh or Babylon. If the ancient Israelites really were the chosen people of the most powerful entity in existence, it should be expected that they would be able to conquer the Egyptians, the Assyrians, the Babylonians and the Persians rather than being conquered by them.

I love it. Hopefully no atheist will ever tell me again that they don't believe in "religion" since I see the evidence in the teachings, dogma and practices here every day.

Say,maybe atheists are included in the 90% of Americans who believe in a higher power after all.

That "higher power" being the high priests of atheism,the ACLU and the liberal chowerheads who have totally mangled the so called "establishment clause" of the First Amendment to mean that a football coach and an elementary school teacher are "Congress" and they're "making law" when they say the word God.

What the fuck are you talking about Bedrock?

Nothing you have written here has anything to do with the topic of the post and nothing I have written here has been ACLU boosterism or condeming a public school teacher for wearing a crucifix in class. As I already informed you, my son's kindergarten teacher did wear one openly and it was cool with me.

"Nothing you have written here has anything to do with the topic of the post.."

I don't know, Tommy. "The Chosen People of the Supreme Being Test" sounds like a litmus test for the atheist faith to me.

"Hopefully no atheist will ever tell me again that they don't believe in "religion" since I see the evidence in the teachings, dogma and practices here every day."

Well duh, Bedrock. If I am to be expected to believe the claims of a particular religion, of course it has to pass a litmus test.

One of the foundations of belief in Christianity, and which continues today in Judaism, is that the Jews are the chosen people of the creator of the universe.

I examine the historical record to show that this is an absurd claim.

After all, if the fans of a particular sports team claimed that their favorite team was the chosen team of god, but that team finished at or near last place every season, such a claim would be unbelievable.

But in your usual distorted way, you conflate examining the claims of religion with believing in religion.

The contract had a fidelity clause:

DT4:25"When you beget children and children's children, and have grown old in the land, if you act corruptly by making a graven image in the form of anything, and by doing what is evil in the sight of the LORD your God, so as to provoke him to anger,
26 I call heaven and earth to witness against you this day, that you will soon utterly perish from the land which you are going over the Jordan to possess; you will not live long upon it, but will be utterly destroyed.
27 And the LORD will scatter you among the peoples, and you will be left few in number among the nations where the LORD will drive you.
28 And there you will serve gods of wood and stone, the work of men's hands, that neither see, nor hear, nor eat, nor smell.

Jay, God forgot to mention that part to Abraham. It's called "shifting the goal posts."

It is also possibly an ex post facto rationalization for defeats suffered by the kingdoms of Israel and Judah at the hands of their neighbors. In other words, it suggests a 6th century BCE authorship.

Tommie,
G_d set the expectation that the covenant had to be kept; initially the sign of the covenant was circumcism, and in GN17:14 G_d says "Any uncircumcised male who is not circumcised in the flesh of his foreskin shall be cut off from his people; he has broken my covenant."

Yeah, okay Jay, the creator of the universe is going to pick a bunch of people in Canaan to be his chosen people and require that infant boys have parts of their penises chopped off. Yeah, that makes a lot of sense.

It's not worldly logic, it contradicts the world. The Hittites are gone, but the tribe of Judah is still here. Go figure?

I think the real question becomes: You got a better explaination?
Somehow all this stuff just working out for us, I mean living in Long Island and not Dafur, is that just simply chance?

I can't imagine the Rocky Marciano story being titled, "Somebody up there is completely indifferent to me!"

Better explanation for what?

Yeah, the Hittites as a nation are gone, but I don't doubt that some people who live in Turkey today are their descendants.

There are still Chinese, Greeks, and Persians today, so what's your point?

The Egyptians had a civilization that endured for almost 3,000 years, which is quite a feat when you consider that the time of Jesus to the present day is approximately 2,000 years.

If the Israelites had never been conquered and never lost a battle throughout their history, that would be evidence that there was a supreme being that gave them favor.

As for Rocky Marciano, as if a supreme being is going to pick sides in boxing matches.