I have long believed that the best thing to ever happen to the Jews in ancient times was the Persian Empire. As I discussed in my post The Chosen People of the Supreme Being Test - Chapter 1 - You Call This A Promised Land?, the Israelites were hard pressed to maintain their kingdom due to the geographic misfortune of finding themselves sandwiched between their more powerful neighbors. But now, being allowed to resettle in the land of Israel, the Jews no longer had to worry about foreign invasion because the Persian Empire also encompassed all of the lands of their former enemies. The Jews now had something vital that their ancestors had always lacked, security. One must look at a map showing the extent of the Persian Empire to truly appreciate how vast it was. 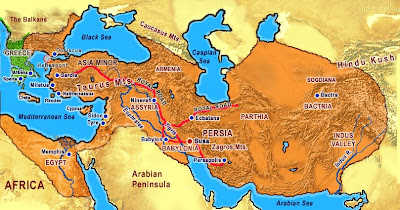 The Jewish exiles who returned to Israel, writes Stark, "were primarily those deeply committed to the Yahweh-Only Sect," and "they launched vigorous efforts to impose true monotheism on the entire society." And their vision of god had changed as well. No longer was Yahweh simply their national god, he was the god of all.

What happened next was that Judaism became centered on the Temple in Jerusalem. "The Judaism put in place by the Yahweh-Only Sect... required strict observance of the Law and absolute intolerance of polytheism. But authority over this new orthodoxy was centered in Jerusalem amd placed in the hands of a professional, hereditary priesthood." With the imposition of a mandatory tithe on the Jewish people, the Temple and its subsidized priesthood became "the dominant financial institution, acting as the state treasury as well as an investment bank."

Repeating an earlier observation, Stark argues that "pluralism is the natural state of any religious economy... It follows that religious monopolies can exist only to the extent that coercion is able to keep dissenting groups tiny and circumspect, and that whenever coercion falters, competing religious groups will arise. Because erstwhile monopoly religions inevitably are relatively lax, lazy, and worldly, most of their opposition will come from groups promoting a far more intense faith - from sects." While the present-day United States does not have nor ever did have a monopoly religious faith, Stark's theory seems validated by shifting religious demographics in the United States today, with the more liberal mainline Protestant denominations in decline while more hardline and conservative denominations like the Southern Baptists have increased in strength.

As for the Jews in post-Exile Israel, though the Temple priesthood was initially founded by those Jews from the Yahweh-Only Sect who had an intense commitment to their faith, "that religious intensity is never transmitted very efficiently from one generation to the next." Consequently, "Israel soon abounded in disputatious sects." Stark provides an overview of the three main Jewish religious groups that coalesced in the years leading up to the Roman era: the Sadducees, the Pharisees, and the Essenes.

In brief, the Sadducees were the Temple priests. The Pharisees were more numerous than the Sadducees. Stark writes that "[p]erhaps the most significant single contribution of the Pharisees was the establishment of synagogues in Israel." Synagogues were buildings used for local worship and the Pharisees held that a synagogue could be set up wherever there were at least ten Jewish men. Though the Sadducees were opposed to the practice of synagogues, the synagogues "became the primary institution of Jewish religious life" following the destruction of the Temple in Jerusalem in 70 C.E. The Essenes were an extremely ascetic group who are believed to have had a community at Qumran where the Dead Sea Scrolls were found.

From there, Stark expounds upon a little-known fact, that contrary to popular belief, that ancient Judaism was a proselytizing faith. This is contrary to the present day, where orthodox Jews tend to be rather insular. I once had an Orthodox Jewish co-worker who told me that his sect, the Lubavitchers, discouraged converts because of the strict requirements of the faith. However, Isaiah 49:6 has God telling the Israelites "I will give you as a light to the nations, that my salvation may reach to the end of the Earth." Given that the Earth is a sphere, one might be tempted to ask exactly where the end of the Earth is located.

During the Roman Era, it is estimated that anywhere from 10 to 15% of the population of the Empire was Jewish. Stark quotes an Adolf von Harnack's claim that "It is utterly impossible to explain the large total of Jews in the Diaspora by the mere fact of the fertility of Jewish families. We must assume... that a very large number of pagans... trooped over to Yahweh." From a practical standpoint, given the frequent conquests and occupations of the land of Israel since the time of the Assyrians, expanding a national religion by acquiring foreign converts could have the potential of providing a greater supply of manpower for an army of liberation.

But as Stark notes, there was in fact a two-way process going on. Just as Diasporan Jews were seeking converts among their Gentile neighbors, so were they too assimilating to the Gentile, particularly Hellenistic, culture of their neighbors. "All but a very few had so entirely lost their Hebrew that they worshipped in Greek and their scriptures had to be translated into Greek. Many Diasporan Jews, probably the majority of them, had abandoned some provisions of the Law. For example, the rules that made it very difficult to eat with non-Jews probably were widely ignored."

The Diasporan Jews then were ripe for a reform movement in their religion that would jettison the strict requirements of Torah law while retaining their belief in what they believed was the one true god. And as luck or fate would have it, such a reform movement was just over the horizon.
Posted by Tommykey at 1:18 AM

Definitely some food for thought in there. I've written before about the effects of the Persian conquest, but I've never really thought about it that way before.

The Black Adder said all that needs to be said about Stark's pretentious simplifications:

And Stark is supposed to be a scholar---and highly regarded in some "right"-thinking circles.

Generic Viagra (sildenafil citrate; brand names include: Aphrodil / Edegra / Erasmo / Penegra / Revatio / Supra / Zwagra) is an effective treatment for erectile dysfunction regardless of the cause or duration of the problem or the age of the patient.
Sildenafil Citrate is the active ingredient used to treat erectile dysfunction (impotence) in men. It can help men who have erectile dysfunction get and sustain an erection when they are sexually excited.
Generic Viagra is manufactured in accordance with World Health Organization standards and guidelines (WHO-GMP). Also you can find on our sites.
Generic Viagra is made with thorough reverse engineering for the sildenafil citrate molecule - a totally different process of making sildenafil and its reaction. That is why it takes effect in 15 minutes compared to other drugs which take 30-40 minutes to take effect.
[b][/b]
Even in the most sexually liberated and self-satisfied of nations, many people still yearn to burn more, to feel ready for bedding no matter what the clock says and to desire their partner of 23 years as much as they did when their love was brand new.
The market is saturated with books on how to revive a flagging libido or spice up monotonous sex, and sex therapists say “lack of desire” is one of the most common complaints they hear from patients, particularly women.

hello, good morning to all, I read his blog yesterday, comparing information, and reach the conclusion, that their information is very professional, I would love to have your blog update about "Rodney Stark's "Discovering God" - Part 6 - From Jews to Christians". Thanks for creating and sharing this information.!