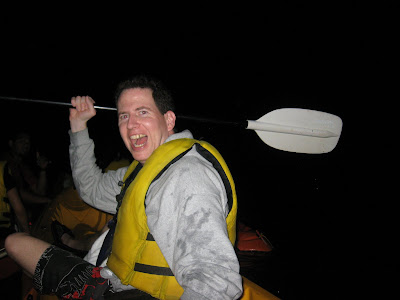 One of the main attractions around Fajardo is a nighttime kayak outing into a lagoon near the Cabezas de San Juan Nature Preserve at the northeastern tip of Puerto Rico. The waters of the lagoon and the path through the mangroves to the lagoon are filled with bioluminescent dinoflagellates that light up when moved, either by the blades of your kayak paddle, the wind, or drops of rain falling on the waters. I got to do this on the evening of Tuesday, the 17th. It was really cool, particularly when the canopy of the mangrove forest blocked out the light and enhanced the bioluminescence. Besides slashing the paddle blades through the water to light it up, I also achieved a sparking effect by splashing the water off the paddles onto the surface.

This was probably my favorite part of the trip, though sadly I had to experience it without the rest of my family. Since I did not know if the paddling would be strenuous beforehand or what the conditions would be like, I was reluctant to take my children on a trip that they might not want to endure, and I couldn't take my wife, otherwise, there would be no one to watch the children. In retrospect though, they probably could have all handled it.

If anyone reading this is planning on staying at the El Conquistador and wants to go on the bioluminescent kayaking trip, DO NOT book the trip through El Conquistador, as they will charge you twice the price. I was fortunate enough to have read about this while researching for the trip. The El Conquistador charges its guests about $89.00 per person. However, if you walk north for about ten minutes along the back road that hugs the shoreline, you will come upon a park in Las Croabas where the various kayak companies are lined up, with most of them charging as little as $45.00 per person. As I did not have reservations, I walked up to each outfit and inquired if they could fit me in and was told they were all booked, until I came upon the one furthest away manned by a guy who works for Eco Action Tours. He had plenty of availability and was happy to accomodate me. Another outfit that offers the tour for $45.00 is Kayaking Puerto Rico.

The group turned out to be rather small actually, a young Puerto Rican couple, and a nice Indian family of four from upstate New York. Because the largest kayaks held a maximum of three persons, their son, about 5 or 6, rode with the guide, while the daughter, about 10, rode with the parents. Unfortunately, the husband and wife did not have any kayaking experience, as they showed up dressed in plain clothes and didn't even have any kind of dry bag for their camera. However, I asked the company rep if he had a dry bag he could loan them and he did, so they were able to take their camera. Also, unfortunately, the husband and wife couldn't paddle very well either, as I observed that they were unable to synchronize their paddling. Consequently, by the time we had entered the mangrove forest, they had fallen far behind us. The guide ended up going back to them, taking their daughter in his kayak along with their son, and then tying their kayak to his.

The rest of the trip proceeded rather smoothly, until a kayaker from another group returning from the lagoon crossed over to our side of the pathway in the mangroves and collided with me, temporarily separating me from my group. Otherwise, the only time the paddling became somewhat difficult was in the lagoon, which got rather choppy as we headed back towards the mangrove. After that, it got quite easy, as the current was in our favor. In fact, the water was so calm that for a little while I was actually handling the paddle with one hand. The Indian man took the picture of me above with my camera and I happily reciprocated and took pictures of them with their camera. All in all it was a nice trip and I would have liked to have done it again with my family, but the weather the following two nights was not favorable. Perhaps on a future trip to Puerto Rico!
Posted by Tommykey at 9:23 PM

It looks like you had fun on the kayak.

This would most likely be my husband's favorite part, too. He always wants to do something unusual and adventurous.