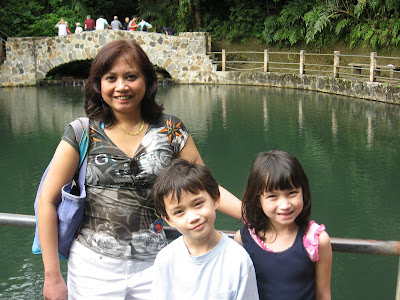 Monday, the 16th, was our first full day in Puerto Rico. We started off the day with a trip to the El Yunque tropical rain forest. Because we had two small kids with us, my wife and I had to opt for the easy tour that did not involve much walking, though at a couple of points we did have to make our way up and down some narrow, rocky paths. It was a very nice trip though, and my kids seemed to enjoy it.

The pool in the background in the photo above was built in the 1930's by the Civilian Conservation Corps. It was used as a public swimming pool until 1975. 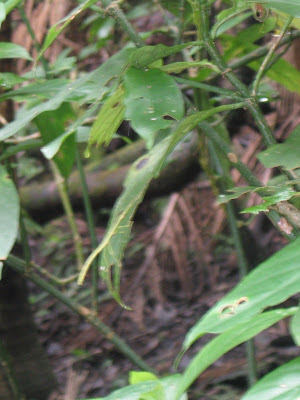 I had a hard time getting a shot of the Walking Stick insect on the leaf hanging down in the center of the picture above. The other shots came out really blurry for some reason, and this one was the best I got. 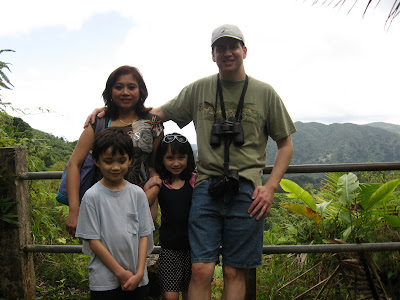 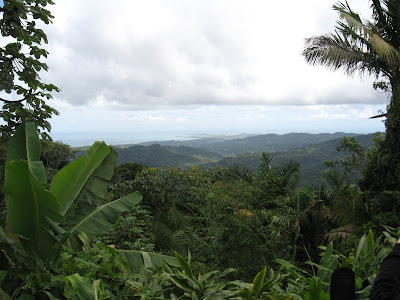 This shot was taken from near the Yokahu Observation Tower, though not from the tower itself. The view is towards the north east corner of the island, and if you can magnify the picture, you just might be able to make out the El Conquistador resort. Unfortunately, I don't seem to have gotten a shot of El Yunque from the resort. It really looms large and mysterious over the north east corner of Puerto Rico, and its peak is often shrouded in mist. Looking up at it, I can understand why so many cultures believed that the gods dwelled at the tops of mountains. 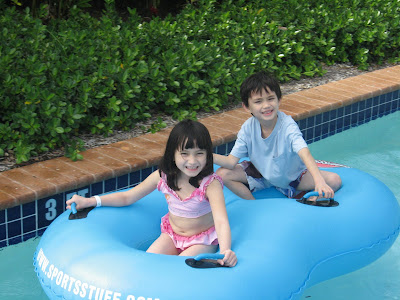 After we got back to the El Conquistador, we spent the afternoon at the resort's signature attraction, the Coqui Water Park. It's not all that big, but it had several really good water slides, and my kids enjoyed floating around the Lazy River on a tube.
Posted by Tommykey at 12:07 AM

Very nice photo's. If I may say, your wife is beautiful! You have a very lovely family. :)
I could float down a lazy river, no problem. :)

Agreed, your wife is too cute. And that place looks magical.

Your wife is indeed cute, and also the kids. You have a very nice-looking family.

I love the third photo down. The "framing" is very nice with the palm trees and the hills in the background are beautiful.