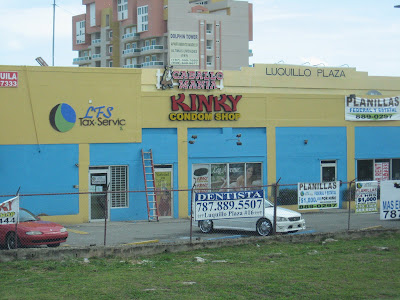 I couldn't leave Puerto Rico without getting a shot of the Kinky Condom Shop in Luquillo on the north side of the main road connecting Fajardo to San Juan. A little further east, on the south side of the ride was another similar establishment called Condom World. I was a little surprised to see these condom stores, given that Puerto Rico is majority Catholic and the Catholic Church's opposition to "artificial" methods of contraception is so well known.

I snapped this photo on the bus ride from the El Conquistador Resort back to Luis Munoz Marin International Airport to catch our flight home.

Hilarious! What are kinky condoms? Don't answer that!

I dunno. I didn't get to go in there.

Hi I'm from Puerto Rico and also a costumer of Kinky condom shop and catholic also. The article have something true, then catholics don't aprove artificial contraception, but this store is not only about condoms, the have sexy lingirie, contumes, shoes, movies, sex toys.Finally so many things that the only thing you need to go there is a good imagination and be free to love your sexuality and know how to express your self!!!!

Thanks for the insider's perspective, Yani? ;-)

Sorry, iqnore the question mark I inadvertently typed above.

I was so glad to see this picture. Thanks for posting it. My husband and daughter and son-in-law just got back from PR last night and this shop was near the villa we were staying. I had wanted to stop in the condom shop just because I was so curious to see what was in there (a whole shop of condoms??) But my son-in-law refused to stop with his MIL in the car.

Hi I'm the owner of kinky condom shop I'm glad to know your curios so find us on facebook or mysace write us and we can send all the info you required. Thanks wilfredo